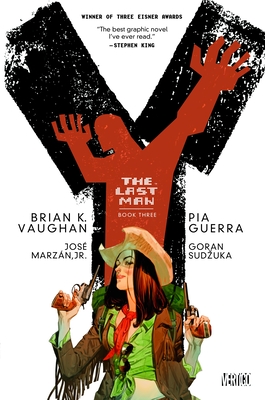 Every man, every boy and every other mammal with a Y chromosome everywhere on Earth is dead. The gears of society grind to a halt following the loss of nearly half the planet’s population, and a world of women are left to pick up the pieces and try to keep civilization from collapsing entirely.

The “gendercide,” however, is not absolutely complete. For some unknown reason, one young man named Yorick Brown and his male monkey, Ampersand, are spared. Overnight, this anonymous twentysomething becomes the most important person on the planet—the key, it is hoped, to unlocking the secret of the mysterious sex-specific plague.

For Yorick himself, the most important person on the planet is 7,000 miles away—and he will stop at nothing to find her. But with an entire ocean still standing between them, chances for a reunion are fading—and new threats are closing in from every side.

Brian K. Vaughan is the Eisner Award-winning co-creator of the critically acclaimed comics series Y: The Last Man and Ex Machina. He also co-created the Vertigo graphic novel Pride of Baghdad and served as a writer and producer for the hit television series Lost. He is currently writing the bestselling Image Comics series Saga and the online comics series The Private Eye and is the showrunner and executive producer of the hit CBS television series Under the Dome, based on the bestselling novel by Stephen King.