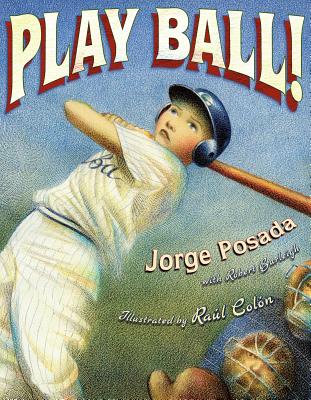 
This book has been declared out of stock indefinitely, so we are unlikely to be able to get it.
Based on the childhood of New York Yankees catcher Jorge Posada, this is the story of a boy from Puerto Rico who grew up to be a champion.

Jorge loved the feel of the ball in his glove, the bat in his hand, and the game of baseball. Day and night he would play with his sister, his father, and his friends. At night he dreamed of baseball. When he and his mother visit New York and he sees Yankee Stadium for the first time, he knows there is only one way to get there: work hard and play ball.
Jorge Posada is an all-star catcher for the New York Yankees, a position he has held since 2000. Laura Posada is an attorney, a certified personal trainer, and CEO of Laura Posada, LLC. The couple lives with their two children, Jorge Luis and Paulina, in Florida.

Robert Burleigh is the award-winning author of many books for children, including The Adventures of Mark Twain by Huckleberry Finn, illustrated by Barry Blitt; Night Flight, illustrated by Wendell Minor; Black Whiteness, illustrated by Walter Lyon Krudop; and Sylvia’s Bookshop, illustrated by Katy Wu. His many other books include Hoops; Stealing Home; and Clang! Clang! Beep! Beep! He lives in Michigan.

Raúl Colón is the award-winning illustrator of many picture books, including Draw!, an ALA Notable Book and recipient of the International Latino Book Award; Imagine!, an ALA Notable Book, a New York Public Library Best Book for Kids, and a BookPage Best Book; Susanna Reich’s José! Born to Dance; Angela’s Christmas by Frank McCourt; and Jill Biden’s Don’t Forget, God Bless Our Troops. Mr. Colón lived in Puerto Rico as a young boy and now resides in New City, New York, with his family.