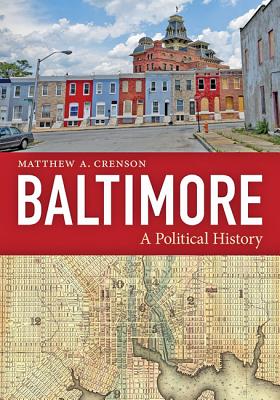 By Matthew A. Crenson

How politics and race shaped Baltimore's distinctive disarray of cultures and subcultures.

Charm City or Mobtown? People from Baltimore glory in its eccentric charm, small-town character, and North-cum-South culture. But for much of the nineteenth century, violence and disorder plagued the city. More recently, the 2015 death of Freddie Gray in police custody has prompted Baltimoreans--and the entire nation--to focus critically on the rich and tangled narrative of black-white relations in Baltimore, where slavery once existed alongside the largest community of free blacks in the United States.

Matthew A. Crenson, a distinguished political scientist and Baltimore native, examines the role of politics and race throughout Baltimore's history. From its founding in 1729 up through the recent past, Crenson follows Baltimore's political evolution from an empty expanse of marsh and hills to a complicated city with distinct ways of doing business. Revealing how residents at large engage (and disengage) with one another across an expansive agenda of issues and conflicts, Crenson shows how politics helped form this complex city's personality.

Crenson provocatively argues that Baltimore's many quirks are likely symptoms of urban underdevelopment. The city's longtime domination by the general assembly--and the corresponding weakness of its municipal authority--forced residents to adopt the private and extra-governmental institutions that shaped early Baltimore. On the one hand, Baltimore was resolutely parochial, split by curious political quarrels over issues as minor as loose pigs. On the other, it was keenly attuned to national politics: during the Revolution, for instance, Baltimoreans were known for their comparative radicalism. Crenson describes how, as Baltimore and the nation grew, whites competed with blacks, slave and free, for menial and low-skill work. He also explores how the urban elite thrived by avoiding, wherever possible, questions of slavery versus freedom--just as wealthier Baltimoreans, long after the Civil War and emancipation, preferred to sidestep racial controversy.

Peering into the city's 300-odd neighborhoods, this fascinating account holds up a mirror to Baltimore, asking whites in particular to reexamine the past and accept due responsibility for future racial progress.

Matthew A. Crenson is a professor emeritus of political science at Johns Hopkins University. He is the author of Neighborhood Politics and a coauthor of Downsizing Democracy: How America Sidelined Its Citizens and Privatized Its Public.