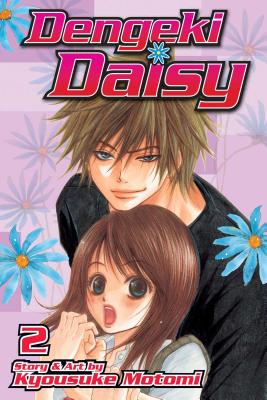 This is book number 2 in the Dengeki Daisy series.

A New York Times' bestseller with a romantic storyline that is unique, funny and touching. After orphan Teru Kurebayashi loses her beloved older brother, she finds solace in the messages she exchanges with DAISY, an enigmatic figure who can only be reached through the cell phone her brother left her. Meanwhile, mysterious Tasuku Kurosaki always seems to be around whenever Teru needs help... Could DAISY be a lot closer than Teru thinks? When Teru's home gets burglarized, she ends up staying at Kurosaki's apartment. The close quarters lead to tension, but things get even more complicated when a woman named Riko Onizuka shows up, bringing up a past that involves Kurosaki...
Born on August 1, Kyousuke Motomi debuted in Deluxe Betsucomi with Hetakuso Kyupiddo (No Good Cupid) in 2002. She is the creator of Dengeki Daisy, Beast Master, and QQ Sweeper, all available in North America from VIZ Media. Motomi enjoys sleeping, tea ceremonies and reading Haruki Murakami