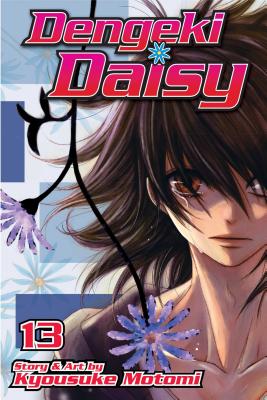 This is book number 13 in the Dengeki Daisy series.

The past continues to haunt Teru and Kurosaki when they’re given a chance to find the mysterious “M’s Last Testament.” Unfortunately, their savage nemesis Akira has his eyes set on finding it too! Will Akira beat them to the punch? Or does Teru have something up her sleeve?
Born on August 1, Kyousuke Motomi debuted in Deluxe Betsucomi with Hetakuso Kyupiddo (No Good Cupid) in 2002. She is the creator of Dengeki Daisy, Beast Master, and QQ Sweeper, all available in North America from VIZ Media. Motomi enjoys sleeping, tea ceremonies and reading Haruki Murakami.