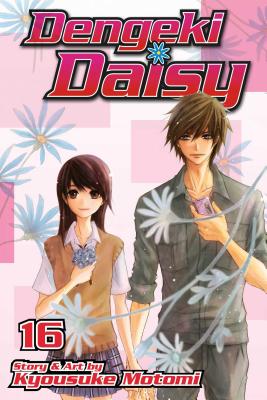 This is book number 16 in the Dengeki Daisy series.

A huge explosion goes off on the uninhabited island that Kurosaki, Teru and Akira are on! What is the fate of these three, and what does their future hold? The Dengeki Daisy series comes to a conclusion, followed by bonus material, two special chapters, and the author’s debut manga, “No-Good Cupid”!
Born on August 1, Kyousuke Motomi debuted in Deluxe Betsucomi with Hetakuso Kyupiddo (No Good Cupid) in 2002. She is the creator of Dengeki Daisy, Beast Master, and QQ Sweeper, all available in North America from VIZ Media. Motomi enjoys sleeping, tea ceremonies and reading Haruki Murakami.