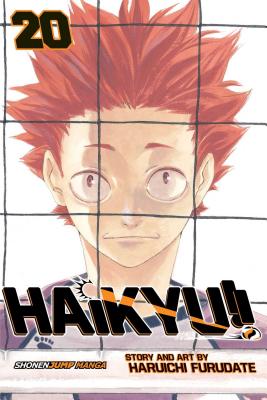 This is book number 20 in the Haikyu!! series.

The fourth set of the Miyagi Prefecture qualifier round finals is quite the nail-biter! Karasuno’s back is against the wall, and there’s no room left for error. Their middle blockers continue to give it all they’ve got as the tense back-and-forth continues, but towards the end of the set, Kageyama starts looking a little off…! With loss looming overhead, can Karasuno pull itself back together and win the game?!
Haruichi Furudate began his manga career when he was 25 years old with the one-shot Ousama Kid (King Kid), which won an honorable mention for the 14th Jump Treasure Newcomer Manga Prize. His first series, Kiben Gakuha, Yotsuya Sensei no Kaidan (Philosophy School, Yotsuya Sensei’s Ghost Stories), was serialized in Weekly Shonen Jump in 2010. In 2012, he began serializing Haikyu!! in Weekly Shonen Jump, where it became his most popular work to date.