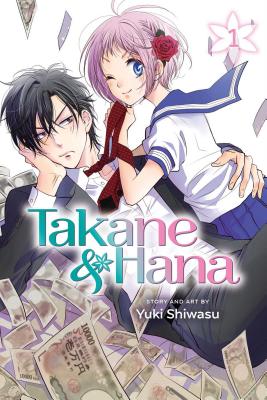 This is book number 1 in the Takane & Hana series.

A strong-willed high school girl and a hot young scion of a business empire can’t help trying to outwit each other every chance they get… But could these opposites be conning themselves out of the perfect match?!

After her older sister refuses to go to an arranged marriage meeting with Takane Saibara, the heir to a vast business fortune, high schooler Hana Nonomura agrees to be her stand-in to save face for the family. But when these two utter opposites pair up, get ready for some sparks to fly!

The meeting between Takane and Hana ends in an explosive manner, and Hana is convinced that she’ll never have to see that awful Takane again. But Takane actually seems interested in Hana! Exasperated by Takane’s immature attitude, yet amused and intrigued despite herself, Hana wonders if her hilarious rivalry with Takane just might lead to love!
Born on March 7 in Fukuoka Prefecture, Japan, Yuki Shiwasu began her career as a manga artist after winning the top prize in the Hakusensha Athena Newcomers’ Awards from Hana to Yume magazine. She is also the author of Furou Kyoudai (Immortal Siblings), which was published by Hakusensha in Japan.