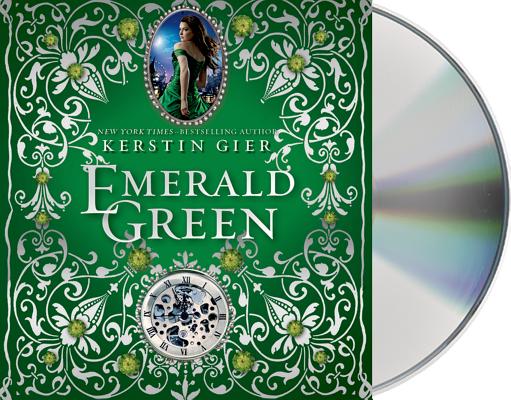 This is book number 3 in the The Ruby Red Trilogy series.

In Kerstin Gier's Emerald Green, Gwen has a destiny to fulfill, but no one will tell her what it is.

She's only recently learned that she is the Ruby, the final member of the time-traveling Circle of Twelve, and since then nothing has been going right. She suspects the founder of the Circle, Count Saint-German, is up to something nefarious, but nobody will believe her. And she's just learned that her charming time-traveling partner, Gideon, has probably been using her all along.
This stunning conclusion to The Ruby Red Trilogy picks up where Sapphire Blue left off, reaching new heights of intrigue and romance as Gwen finally uncovers the secrets of the time-traveling society and learns her fate.

Kerstin Gier is the bestselling author of the Ruby Red trilogy, as well as several popular novels for adults. She lives in Germany.

Marisa Calin is an actress, narrator, and novelist born in England and educated in New York at the American Academy of the Dramatic Arts. An artist with a flair for everything literary, she has written a young adult novel, You & Me, which received a Kirkus Starred Review, and has narrated the audio books Ruby Red and Sapphire Blue by Kerstin Gier.

“Ruby Red series fans will not be disappointed with this surprising and romantic finale.” —Kirkus Reviews

“Gier succeeds on her own terms. . . . Will leave readers anticipating the publication of the next installment, Sapphire Blue.” —The New York Times Book Review

“Humorous, romantic and suspenseful, the plot is fast-paced and impossible to put down.” —Justine magazine

“SOSOSOSOSOSO amazing. So. Amazing. Really. Unfortunately, the sequel doesn't come out in English until 2012. *sigh* But seriously. This is THE best book I have read in a VERY long time. You should definitely read it.” —J'adore Dessiner Blog

“I giggled, I sat on the edge of my seat, and I enjoyed every second of it. I will be waiting very anxiously to devour Sapphire Blue when it is released.” —Pure Imagination Blog

“I'm ready to read the next two NOW!” —YA Lit Ramblings Blog