Delicious December: How the Dutch Brought Us Santa, Presents, and Treats: A Holiday Cookbook (Hardcover) 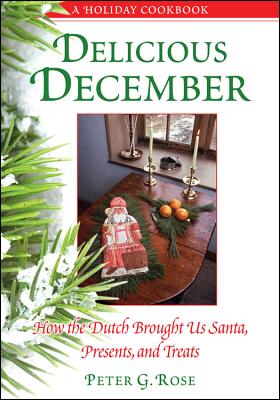 Delicious December: How the Dutch Brought Us Santa, Presents, and Treats: A Holiday Cookbook (Hardcover)


This book has been declared out of stock indefinitely, so we are unlikely to be able to get it.
Delicious December mixes food and history in a celebration of Dutch and American Christmas traditions. In more than one hundred tried-and-true recipes, award-winning food historian Peter G. Rose draws on traditions that date back to the Middle Ages, as well as her own reminiscences of her native country, and suggests many ways to incorporate these true Dutch treats into American celebrations. The book not only talks about the history and recipes of St. Nicholas Day celebrations, but also about Dutch specialties for Christmas and New Year's. Rose includes recipes for savory cookies and party treats as well as menus and recipes for the parties that might happen between the feast days. Divided into two parts, part one discusses the history of St. Nicholas, how he was brought to America and became Santa, and the other changes that have taken place here as well as in the Netherlands. The second part consists of 111 recipes that are easy to make and easy to love. Delicious December is for anyone interested in food and history, and those of Dutch descent will find many old favorites here, together with new, fresh ideas based on long traditions.
Peter G. Rose has published numerous articles and books on Dutch, Dutch American, and Hudson Valley cuisine, including Summer Pleasures, Winter Pleasures: A Hudson Valley Cookbook, also published by SUNY Press; Food, Drink and Celebrations of the Hudson Valley Dutch; The Sensible Cook: Dutch Foodways in the Old and the New World; and Foods of the Hudson: A Seasonal Sampling of the Region's Bounty. She is the coauthor (with Donna R. Barnes) of both Matters of Taste: Food and Drink in Seventeenth-Century Dutch Art and Life and Childhood Pleasures: Dutch Children in the Seventeenth Century. In 2002 she was the recipient of the Alice P. Kenney Award for research and writing on the food customs and diet of the Dutch settlers in New Netherland. She lives in South Salem, New York.