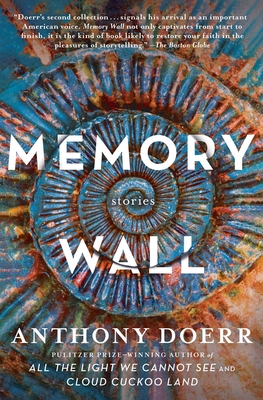 “When people say they don't read short stories because a story lacks the depth and complexity of a novel, you should hand them this book. The title story alone is richer than some novels and is one of the best pieces of fiction I've ever read. The rest of the collection is outstanding as well. With settings as varied as Africa, China, and the American West featuring characters black, white and Asian, Doerr reminds us of the power and beauty of memory and storytelling.”
— Cody Morrison, Square Books, Oxford, MS

In the wise and beautiful second collection from the acclaimed, Pulitzer Prize-winning #1 New York Times bestselling author of All the Light We Cannot See, and Cloud Cuckoo Land, "Doerr writes about the big questions, the imponderables, the major metaphysical dreads, and he does it fearlessly" (The New York Times Book Review).

Set on four continents, Anthony Doerr's new stories are about memory, the source of meaning and coherence in our lives, the fragile thread that connects us to ourselves and to others. Every hour, says Doerr, all over the globe, an infinite number of memories disappear. Yet at the same time children, surveying territory that is entirely new to them, push back the darkness, form fresh memories, and remake the world.

In the luminous and beautiful title story, a young boy in South Africa comes to possess an old woman's secret, a piece of the past with the power to redeem a life. In "The River Nemunas," a teenage orphan moves from Kansas to Lithuania to live with her grandfather, and discovers a world in which myth becomes real. "Village 113," winner of an O'Henry Prize, is about the building of the Three Gorges Dam and the seed keeper who guards the history of a village soon to be submerged. And in "Afterworld," the radiant, cathartic final story, a woman who escaped the Holocaust is haunted by visions of her childhood friends in Germany, yet finds solace in the tender ministrations of her grandson.

Every story in Memory Wall is a reminder of the grandeur of life--of the mysterious beauty of seeds, of fossils, of sturgeon, of clouds, of radios, of leaves, of the breathtaking fortune of living in this universe. Doerr's language, his witness, his imagination, and his humanity are unparalleled in fiction today.
Anthony Doerr is the author of the New York Times bestselling Cloud Cuckoo Land, which was a finalist for the National Book Award, and All the Light We Cannot See, winner of the Pulitzer Prize, the Carnegie Medal, the Alex Award, and a #1 New York Times bestseller. He is also the author of the story collections Memory Wall and The Shell Collector, the novel About Grace, and the memoir Four Seasons in Rome. He has won five O. Henry Prizes, the Rome Prize, the New York Public Library’s Young Lions Award, the National Magazine Award for fiction, a Guggenheim Fellowship, and the Story Prize. Born and raised in Cleveland, Ohio, Doerr lives in Boise, Idaho, with his wife and two sons.
“Doerr writes about the big questions, the imponderables, the major metaphysical dreads, and he does it fearlessly.”—New York Times Book Review