Woodstock: Back to Yasgur's Farm (Hardcover) 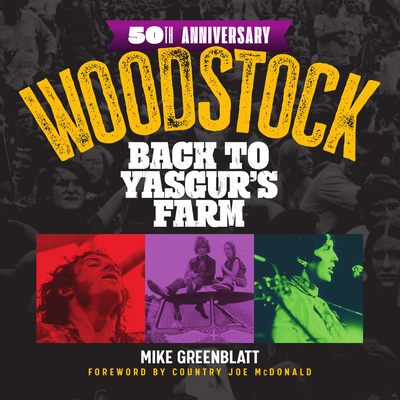 Woodstock: Back to Yasgur's Farm (Hardcover)


We can usually get this book in 3 to 7 days, except during a pandemic. We are doing our best
"We're all still at Woodstock"
--Richie Havens

The year was 1969. Richard Nixon was in the White House. Neil Armstrong was on the Moon. And revolution was in the air. In that backdrop, 500,000 young people gathered on a mid-August weekend in upstate New York for the promise of three days of peace and music. What they experienced at the Woodstock Music and Art Fair was something far greater.

Celebrating "the greatest peaceful event in history," Woodstock 50th Anniversary: Back to Yasgur's Farm offers a dazzlingly and compelling front-row seat to the most important concert in rock history, an implausible happening filled with trials and triumphs that defined a generation.

Author and Woodstock attendee Mike Greenblatt brilliantly captures the power of music's greatest performers such as Jimi Hendrix, Janis Joplin, Joe Cocker, Santana and the Who, while sharing stories both personal and audacious from the crowd of a half million strong who embraced not only the music but each other.

The book features a Foreword by Country Joe McDonald, whose rousing solo acoustic version of "The Fish Cheer/I-Feel-Like-I'm-Fixin'-To-Die Rag" was one of the most memorable performances at Woodstock.  In addition, all 32 performances at the festival are showcased.

Equal parts circus and surreal, Woodstock 50th Anniversary: Back to Yasgur's Farm tells a transcendent tale of a musical and mythical moment in time.
MIKE GREENBLATT has been writing for Goldmine magazine and New Jersey's Aquarian Weekly for more than 35 years. His writing subjects fill the Rock and Roll Hall of Fame. He's interviewed Joe Cocker, Graham Nash, David Crosby, Carlos Santana, Bruce Springsteen, Paul McCartney, Johnny Cash, and members of The Rolling Stones and The Beatles. He was 18 when he attended Woodstock in 1969. In addition to writing about music, Greenblatt has worked on publicity campaigns for The Animals, Pat Benatar, Jonny Winter, Tommy James and Richard Branson, among others.  He is currently the editor of Home (thejerseysound.com).
"Exquisite! A beautiful piece of work!" --Michael Des Barres, musician, actor, Sirius XM host


"I thought it was very good. I enjoyed it immensely." --Southside Johnny