The New Politics of the Old South: An Introduction to Southern Politics, Fifth Edition (Paperback) 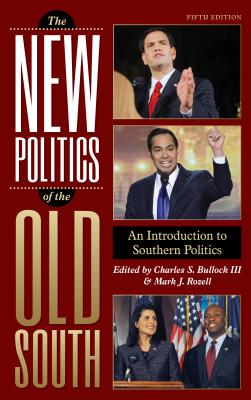 The New Politics of the Old South: An Introduction to Southern Politics, Fifth Edition (Paperback)


We can usually get this book in 3 to 7 days, except during a pandemic. We are doing our best
The New Politics of the Old South, Sixth Edition is available August 2017. Paperback ISBN 9781538100158 Now in its fifth edition, The New Politics of the Old South is the best and most comprehensive analysis and history of political behaviors and shifting demographics in America's southern states. Edited by leading scholars Charles S. Bullock III and Mark J. Rozell, this book has been updated through the 2012 elections to provide the most accurate and useful snapshot of the state of southern politics, and the ways in which they have developed over time. The southern electorate is a fascinating, dynamic body politic, and the study of its evolution is paramount to understanding the broader political developments occurring at a national level. While accessible to any interested reader, this edition illuminates the South's essential and growing role in the study, and the story, of American politics.
Charles S. Bullock III is Richard B. Russell Professor of Political Science at the University of Georgia. Mark J. Rozell is Acting Dean and Professor of Public Policy at George Mason University.