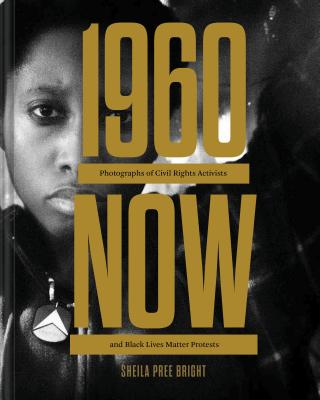 By Sheila Pree Bright, Alicia Garza (Introduction by)
$30.00
We can usually get this book in 3 to 5 days, except during a pandemic. We are doing our best

The fight for equality continues, from 1960 to now. Combining portraits of past and present social justice activists with documentary images from recent protests throughout the United States, #1960Now sheds light on the parallels between the 1960s Civil Rights Movement and the Black Lives Matter movement of today. Shelia Pree Bright's striking black-and-white photographs capture the courage and conviction of '60s elder statesmen and a new generation of activists, offering a powerful reminder that the fight for justice is far from over. #1960Now represents an important new contribution to American protest photography.

Fans of Training School for Negro Girls, Martha Rosler: Irrespective, and Charles White: A Retrospective will love this book.

Sheila Pree Bright is an award-winning fine art photographer based in Atlanta, Georgia.

Alicia Garza is an organizer, writer, and the cocreator of #BlackLivesMatter, an international movement and organizing project focused on combatting anti-Black state-sanctioned violence. She lives and works in Oakland, California.

“In this powerful photo collection, Atlanta photographer-activist Sheila Pree Bright documents the Black Lives Matter movement, drawing parallels with the civil rights movement of 1960s. She argues that today’s marches and rallies are a continuation in the fight for equality, and she hopes readers of her book will ‘seek the common thread that connects the human condition, to examine what people define for themselves.’ … The most striking feature of the book is the range of photos, which showcase the diversity of the groups and individuals who are part of the movement, including children, the elderly, those of different creeds and faiths, LGBT activists, and university students.” —Publishers Weekly

“#1960Now is a visually arresting coffee-table tome filled with activism photography shot across the U.S., from Ferguson, Missouri, to Atlanta to Philadelphia. Although the pics are current, they movingly evoke the spirit of the sixties.” —Essence

“Sheila Pree Bright’s photographs offer an intimate and humanistic view of black protest: a demonstrator staring mournfully into the camera, a tear running down his cheek; a somber activist, his mouth covered by tape inscribed with the name of Freddie Gray, the 25-year old African-American man killed while being transported by police in Baltimore; a marcher in rapt attention, his eyes closed, his hands clapping as if almost in prayer; and a moving juxtaposition of portraits—the artist Bree Newsome, who took down the Confederate Flag at the South Carolina Capitol in 2015, and Roslyn Pope, a member of the 1960s Atlanta Student Movement.… By embracing the lush black-and-white aesthetic of legendary civil rights photographs, Ms. Bright underscores historical continuity. While millions of cellphone photos are generated each day—some forceful testaments to racial violence and injustice—few possess the grace and quiet lyricism of her images.” —The New York Times Lens blog