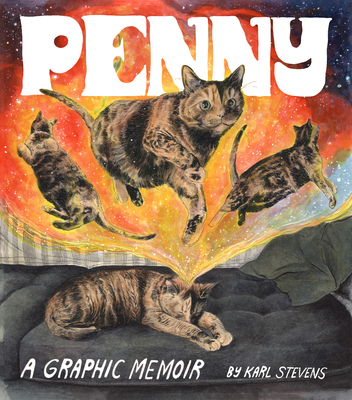 
On Our Shelves Now as of 24 Hours Ago. Please call first to confirm.
This colorful graphic novel features the philosophical and existential musings of a cat named Penny.

Told through a collection of stories, Penny: A Graphic Memoir wanders through her colorful imagination as she recalls her humble beginnings on the streets of New York and waxes poetic about the realities of her sheltered life living in an apartment with her owners.

Filled with ennui, angst, and vivid dreams, Penny proves that being a cat is more profound than we once thought. A unique blend of high art and humor, Penny: A Graphic Memoir perfectly portrays one cat's struggles between her animal instincts, her philosophical reflections, and the lush creature comforts of a life with human servants.

• DISTINCTIVE, BEAUTIFUL, AND FUNNY: Reading like a highbrow Garfield, this unique dose of sardonic wit and cat content combines humor and storytelling with Karl Stevens' very realistic illustration style. Fresh and imaginative, this graphic novel feels familiar and accessible, featuring one of the world's most beloved animals.
• IMPRESSIVE AND DECORATED AUTHOR: Karl Stevens has written four graphic novels, and his comics have appeared regularly in the New Yorker, Village Voice, and Boston Phoenix. His work has been well received all around, and The Lodger was a Los Angeles Times Book Prize finalist.
• UNIQUE GIFT FOR CAT LOVERS: For cat lovers who have all the classic cat humor books, this is something new that's both unique but familiar, combining a new voice with stunning artwork in a fresh format. For anyone who wonders what their cat is thinking, this book is pitch-perfect, and the gorgeous artwork and package make it a delightful present.
Karl Stevens is a graphic novelist and painter whose comics have appeared regularly in the New Yorker, Village Voice (where this series premiered), and Boston Phoenix. Stevens' graphic novels include Whatever (2008), The Lodger (2010), Failure (2013), and The Winner (2018). He lives in Boston with his wife and their overlords cats, Penny and Pepper.
"Penny examines our relentless desire for more while questioning the very nature of that desire when occupying a position of relative privilege - an examination made more poignant through the collective cloistered experience of the current global pandemic...It is at [the] intersection between the mundane and the marvelous where Steven’s work truly shines. Although the text is filled with beautiful renditions of Penny’s flights of fantasy in Stevens’ signature intricately cross-hatched and boldly water colored style, it is his transformation of ordinary objects through Penny’s perspective that really capture the imagination. Patterns of light and shadow transfix both Penny and the reader through Stevens’ hand, inert objects are animated and packed with personality, and cardboard boxes become portals to other dimensions."

Named a "Best Comics and Graphic Novels of 2021"

"Sure to delight cat lovers."

"Stevens employs his detailed and stylistic realism to nice comic effect [his] clever send-up should delight the feline faithful."

"So, yes, to Penny and yes, to Karl Stevens. Few cartoonists are in the same league as he is."

"What sets Penny apart from the cat crowd is Stevens's skill at depicting her. A bit snub-nosed, like an English shorthair, Penny is shown in both her most graceful and most endearingly awkward poses, always identifiably feline and yet with an obvious intelligence and focus that makes her most lofty thoughts credible. It's this clear-eyed love and attention that makes "Penny" stand out, revealing, as great authors do, that even the smallest life may be full of interest - and profound."

Mother's Day Gift Pick "If you've ever wondered what goes through a cat's mind, Penny is the perfect book."

“In Penny: A Graphic Memoir , the Boston-based artist spins a few dozen variations on ‘I wonder what that loveable furball is thinking?’ and makes you like it…His photorealistic line and deft watercolors…make Penny irresistible, even for feline skeptics.”

"What Stevens has performed here is, in fact, a sort of miracle. Not because the page after page of full-color illustrations in this new trade paperback from Chronicle Books are extraordinary, the man's meticulous pen-and-watercolor work so precise as to approach, at times, photorealism ... not because presenting the inner life of a domestic varmint in its own words is a novel conceit (cf. William Braden's Henri, le Chat Noir or, FFS, Garfield) ... not because Penny could double as an accurate glimpse of Contemporary (Pet-Involved) Life in America ... but because, moreso than even B. Kliban or T.S. Eliot or Edward Gorey or Rita Mae Brown accomplished, Stevens' paneled narrative of depictions here provokes the sensation of actually having a pet cat."