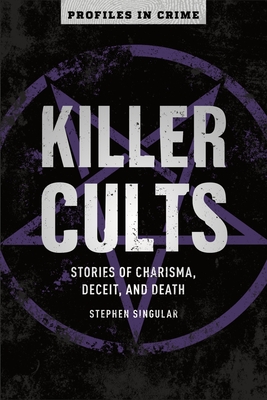 
Backordered. There will likely be a delay in getting this book
What's scarier than a murderer? Someone with the charisma to compel others to kill for them . . . or to kill themselves. Meet these cult leaders--and get an inside look at their beliefs and how they controlled others. Some cults, led by leaders like Charlie Manson, Jim Jones, and David Koresh, are notorious. But others are less well known, such as Shoko Asahara and his doomsday cult, Aum Shinrikyo, who orchestrated the sarin gas attack on the Tokyo subway. Or Joseph Di Mambro and Luc Jouret, who founded the Order of the Solar Temple, a doomsday cult that led to the death of 51 members by murder or suicide. Then there is Marshall Applewhite, leader of Heaven's Gate, who, along with 38 followers, killed themselves in the belief that the Haley-Bopp comet signaled the arrival of a spaceship that would transport them to a higher plane of existence. What makes cult leaders so compelling is their often-unfathomable power over their adherents. Why do people kill others or themselves for a questionable set of beliefs? Killer Cult Leaders tells the stories behind both famous and unfamiliar cults, and the people behind them. Across a series of profiles, we learn the jaw-dropping truth behind some of the most mystifying and deadly cults, and their leaders, all of whom led their followers down a dark, murderous path.
Stephen Singular is a veteran crime journalist and the bestselling author of numerous books, including Unholy Messenger: The Life & Crimes of The BTK Serial Killer and When Men Become Gods, about jailed Mormon polygamist Warren Jeffs. His first book, Talked to Death: The Life & Murder of Alan Berg, was nominated for an Edgar Award and served as the basis for the Oliver Stone film, Talk Radio. Singular has appeared on CNN's Anderson Cooper 360, MSNBC's Hardball, and The Rachel Maddow Show, as well as serving as a commentator for legal cases on TruTV.