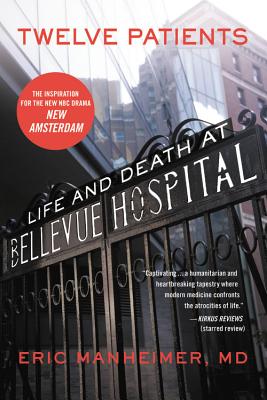 
We can usually get this book in 3 to 7 days, except during a pandemic. We are doing our best
In the spirit of Oliver Sacks and the inspiration for the NBC drama New Amsterdam, this intensely involving memoir from a Medical Director of Bellevue Hospital looks poignantly at patients' lives and highlights the complex mind-body connection.

Using the plights of twelve very different patients--from dignitaries at the nearby UN, to supermax prisoners at Riker's Island, to illegal immigrants, and Wall Street tycoons--Dr. Eric Manheimer "offers far more than remarkable medical dramas: he blends each patient's personal experiences with their social implications" (Publishers Weekly).
Manheimer is not only the medical director of the country's oldest public hospital, but he is also a patient. As the book unfolds, the narrator is diagnosed with cancer, and he is forced to wrestle with the end of his own life even as he struggles to save the lives of others.
Eric Manheimer, M.D. was the Medical Director at Bellevue for over thirteen years and is a Clinical Professor at the New York University School of Medicine. He is an Internist who trained at Kings County Hospital in Brooklyn, New York in Internal Medicine. Following his Chief Residency there, he moved to Hanover, New Hampshire where he was a member of Dartmouth Medical School and the Hitchcock Clinic for many years.

He has had a long interest in international health working in Haiti and Pakistan and in medical anthropology, history, the social sciences and literature particularly of Latin America. Along with his wife Diana Taylor, who is a University Professor at New York University, Eric travels extensively in Latin America and Mexico. He has two children and one grandchild, who was born at Bellevue.