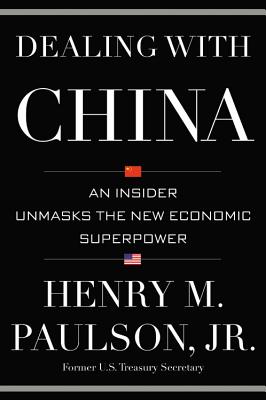 The New York Times bestselling author of Dealing with China takes the reader behind closed doors to witness the creation and evolution and future of China's state-controlled capitalism.

Hank Paulson has dealt with China unlike any other foreigner. As head of Goldman Sachs, Paulson had a pivotal role in opening up China to private enterprise. Then, as Treasury secretary, he created the Strategic Economic Dialogue with what is now the world's second-largest economy. He negotiated with China on needed economic reforms, while safeguarding the teetering U.S. financial system. Over his career, Paulson has worked with scores of top Chinese leaders, including Xi Jinping, China's most powerful man in decades.

In Dealing with China, Paulson draws on his unprecedented access to modern China's political and business elite, including its three most recent heads of state, to answer several key questions:

How did China become an economic superpower so quickly?
How does business really get done there?
What are the best ways for Western business and political leaders to work with, compete with, and benefit from China?
How can the U.S. negotiate with and influence China given its authoritarian rule, its massive environmental concerns, and its huge population's unrelenting demands for economic growth and security?

Written in the same anecdote-rich, page-turning style as Paulson's bestselling memoir, On the Brink, Dealing with China is certain to become the classic and definitive examination of how to engage China's leaders as they build their economic superpower.

As the CEO of Goldman Sachs from 1999-2006 and then as the Treasury Secretary of the United States from 2006-2009, Hank Paulson has sat across the bargaining table from countless Chinese politicians as both a banker and a statesman. Since leaving Washington, the former Treasury Secretary has worked on bridging the gap between East and West through The Paulson Institute, which he describes not as a think tank but as a "think and do" tank.

"But Mr. Paulson's warnings demand attention...[he] knows more about China, its politics and the players behind it than most Westerners...Mr. Paulson's analysis in his book...are all the more remarkable because he has long been a bull on China and has deep friendships with its senior leaders."
—Andrew Ross Sorkin, The New York Times

"Penetrating . . . goes behind closed doors . . . a highly personal, you-are-there telling for how top players in government and finance staved off a disaster that could have been much worse."—Bloomberg News

"Concentrates on his extraordinary thirty months at Treasury . . . Paulson had to wrestle with more, and more burning, crises than any Treasury secretary in history."
—Roger Lowenstein, author of The End of Wall Street, and journalist, New York Times Book Review

"Tells how he brought us back from the brink of financial collapse . . . [includes] major revelations . . . Read On the Brink and get Paulson's take on the whole affair."
—Forbes.com

"The first lengthy account of the crisis from a key decision maker. The book offers a look at Paulson's thinking during those scary days, as well as his sometimes unvarnished opinions of other Washington characters, many of whom had central roles in managing the government's response."
—Dallas Morning News

"A fantastic read . . . succinct and to the point."
—Business Insider