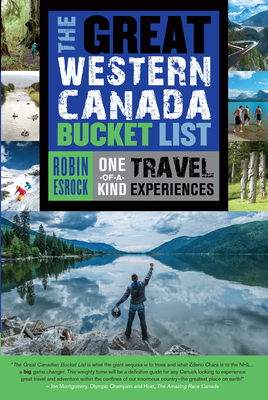 This is book number 3 in the Great Canadian Bucket List series.

Most Canadians think of travel as a way to escape the snow, cold, and dreary winter skies. But Robin Esrock loves all that our western provinces have to offer visitors, and so will you The Great Western Canada Bucket List highlights the best travel experiences to be had on Canada's West Coast. Through nature, food, culture, and history, as well as a few adrenaline rushes and some quirky Canadiana, Robin's personal quest to tick off the very best of Alberta and British Columbia packs in enough adventure for a lifetime. Inside you'll get a first-hand perspective on: - Tracking the spirit bear in B.C.'s Great Bear Rainforest.
- Wine-tasting in the Okanagan.
- Hunting for dinosaurs in Alberta's Badlands.
- Diving a sunken battleship.
- Snorkeling with salmon.
- Getting spiritual with heli-yoga in the Rockies.
- RVing the Icefields Parkway.
Robin Esrock's stories have been published in over a dozen major newspapers worldwide. He is also the creator and co-host of the 40-part television series Word Travels, seen on OLN and CityTV in Canada, on National Geographic International, and on Travel Channel in 100 countries and 21 languages. He lives in Burnaby, British Columbia.