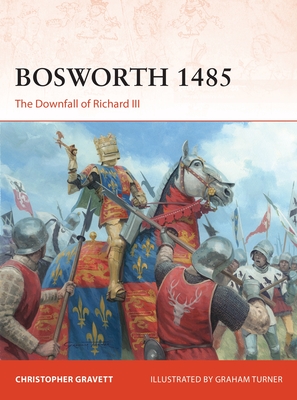 A new study of the Battle of Bosworth, the climactic battle of the Wars of the Roses, based on a new interpretation of events following the discovery of the true location of the battlefield.

The battle of Bosworth was the culmination of the dynastic struggle between the houses of York and Lancaster known as the Wars of the Roses that dominated England in the second half of the 15th century. Edward IV had secured the throne for the house of York, but his early death in 1483, followed by the death of his sons and the taking of the throne by his brother, Richard of York saw a renewed outbreak of fighting. Richard's reign was dogged by rumors of his involvement in murder and began with a major rebellion in 1483, which was put down. Richard faced threats from not only lords he alienated but the Lancastrian faction waiting in the wings, and Henry Tudor decided to take the huge risk of attempting to seize the throne. Richard positioned himself in central England and from there marched to meet Henry's army, finally clashing near Market Bosworth.

Guiding the reader from the campaign's origins to its aftermath, and covering the commanders and forces of King Richard III and Henry Tudor, this is a complete treatment of one of the most important events in English history. The story of Bosworth has been transformed in the 20th century as an extensive survey between 2005 and 2009 by the Battlefields Trust has pinpointed the location of the battlefield, for many years a source of debate and controversy, and this new history is based on that interpretation. It will also highlight the incredible discovery of Richard III's remains in Leicester, the study of the bones and relate this to what was previously thought had happened to him at the end of the battle.

Graham Turner is a leading historical artist, specializing in the medieval period. He has illustrated numerous titles for Osprey, covering a wide variety of subjects from the dress of the 10th-century armies of the Caliphates, through the action of bloody medieval battles, to the daily life of the British Redcoat of the late 18th century. The son of the illustrator Michael Turner, Graham lives and works in Buckinghamshire, UK.