Revenge of the She-Punks: A Feminist Music History from Poly Styrene to Pussy Riot (Paperback) 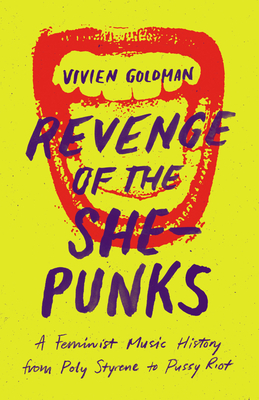 Revenge of the She-Punks: A Feminist Music History from Poly Styrene to Pussy Riot (Paperback)

As an industry insider and pioneering post-punk musician, Vivien Goldman’s perspective on music journalism is unusually well-rounded. In Revenge of the She-Punks, she probes four themes—identity, money, love, and protest—to explore what makes punk such a liberating art form for women.

With her visceral style, Goldman blends interviews, history, and her personal experience as one of Britain’s first female music writers in a book that reads like a vivid documentary of a genre defined by dismantling boundaries. A discussion of the Patti Smith song “Free Money,” for example, opens with Goldman on a shopping spree with Smith. Tamar-Kali, whose name pays homage to a Hindu goddess, describes the influence of her Gullah ancestors on her music, while the late Poly Styrene's daughter reflects on why her Somali-Scots-Irish mother wrote the 1978 punk anthem “Identity,” with the refrain “Identity is the crisis you can't see.” Other strands feature artists from farther afield (including in Colombia and Indonesia) and genre-busting revolutionaries such as Grace Jones, who wasn't exclusively punk but clearly influenced the movement while absorbing its liberating audacity. From punk's Euro origins to its international reach, this is an exhilarating world tour.

Born in London, Vivien Goldman has been a music journalistfor more than forty years and was the trusted chronicler of Bob Marley and Fela Kuti. She was a member of the new-wave bandsChantage and The Flying Lizards; Resolutionary, a retrospective compilation album of her work, was released in 2016. She is an adjunct professor teaching Punk, Afrobeat, and Reggae at New York University, where the Vivien Goldman Punk and Reggae Collection is archived in the Fales Library. A former documentarian, her five previous books include The Book of Exodus: The Making and Meaning of Bob Marley and the Wailers’ Album of the Century. Goldman co-wrote the book for Cherchez La Femme, the Kid Creole musical that premiered at the La Mama Theatre in NYC in 2016.

This book should restore Goldman's place in the rock-crit firmament just as she sets out to give punk's women their long-denied dues.
— The Guardian

Revelatory…[Revenge of the She-Punks] feels like an exhilirating conversation with the coolest aunt you never had, as she leaps from one passion to the next.
— Rolling Stone

Goldman…tells the fascinating tale of how feminist punk evolved…It’s a decades-long story full of radical women making their own noise.
— Rolling Stone, "Best Music Books of 2019"

While Goldman jumps around, hopping from band to band, she places the female musical foment within the critical context of feminist theory and the cultural context of society’s upheaval...Known as the 'Punk Professor' as an adjunct at NYU, Goldman extends her authority here.
— Kirkus

[Revenge of the She-Punks] doesn't just retell the story of punk with an added woman or two; it centers the relationships between gender and the genre, showing how, through the right lens, the story of punk is a story about women's ingenuity and power.
— NPR

Revenge of the She-Punks is an engaging and politically charged exploration of women in music looking to the past, present, and future.
— Bust Magazine

A distinctive look at [punk]…For fans of punk as well as a wider audience of music lovers, feminists, and social historians curious about the genre and its far-reaching influence.
— Library Journal

Alongside musician interviews with the likes of Kathleen Hanna and Patti Smith, the engrossing read leans on the unmatchable source of Goldman herself, who participated in punk's genesis as editor of London weekly Sounds.
— Austin Chronicle

Goldman offers a seamless mix of personal memoir, historical detail, direct interviews with the musicians, and her own academic analysis…[a] seriously excellent treatise. Revenge of the She-Punks is not to be missed.
— PopMatters

Essential…With personal encounters running parallel with themes such as identity and protest, Goldman makes excellent points about punk's 'liberating aspect on the less-privileged sex,' framing it as the 'primal yowl of a rebellious underclass [that] has always specially belonged to girls.'
— Irish Times

Revenge of the She-Punks is as energetic and full of life as I imagine the author must be…an exciting, inspiring and thought provoking book that should be an important weapon in women's ongoing battle for equality, space and freedom.
— Echoes and Dust

Goldman is a trusted guide…By tracing the origin of these feminist players and observing how their music continues to adapt and survive, Revenge of the She-Punks forecasts the longevity of the genre.
— Exclaim!

The language [in Revenge of the She-Punks] is urgent, often furious, sometimes funny and full of piquant turns of phrase…While Goldman isn’t especially interested in trying to define punk – there is plenty of literature on that already – her understanding of it is wide-ranging and determinedly global, travelling way beyond the old DIY cliches.
— Fiona Sturges

[Goldman] turns her pen to the music history we all wanted but were denied; one where women are given the weight and attention they deserve…You’ve all seen the image of Kim Gordon wearing a green T-shirt reading 'Girls invented punk rock, not England'. Goldman’s book serves to confirm this.
— Refinery29

Any feminist punk will know instantly that Revenge of the She-Punks is for them. This isn’t just because author Vivien Goldman’s words are such great company…It's because this is your herstory.
— Loud Women

When it comes to learning about the many women who've been creating punk and punk-related music in the past 40 years, Revenge of the She-Punks…trumps them all…this book serves as a stellar showcase for the strong, yet hidden and often forgotten, collection of women artists and innovators coursing through the history of Punk Rock.
— Bearded Gentlemen Music

[Goldman is] uniquely qualified to write this book…Each chapter begins with a playlist, and even the most knowledgeable music fan is certain to discover some new anthems through Goldman's diverse selection.
— The Current

The music journalist and professor combines her academic prowess with the passion she absorbed as an original she-punk herself, magnifying how deeply embedded women's narratives of self-discovery and empowerment are within the history of punk.
— Wall Street Journal Magazine

A spirited counter-argument to the male-centric narrative of punk rock…[Goldman] captures the artists and their music with sharply focused eyes and ears and a capacious mind. The book, like the music it deals with, is gutsy, bracing, blunt, and sometimes fun.
— The Nation

Reaching beyond the expected roster of women we'd traditionally categorise as punk and including those who redefine what the term actually means, Goldman's book is both authoritative and a hugely entertaining read, with her five decade-long passion for her subject evident on every single page.
— Classic Pop Magazine

The 40 female artists [Goldman] interviews [in Revenge of the She-Punks] remind us how important (and difficult) it is for women to make their own noise.
— The Telegraph

Goldman's punk passion and personal involvement splash throughout the spirited read…If there's anyone to explain punk's boundary-smashing, internationally empowering capabilities for women, it's Goldman. As oozes from the pages of She-Punks, she absolutely lived it.
— Austin Chronicle

[A] seriously excellent treatise. Revenge of the She-Punks is not to be missed. I haven't liked a feminist music book this much since Gillian G. Gaar's She's a Rebel.
— PopMatters, "The Best Books of 2019: Non-Fiction"

[Revenge of the She-Punks] subverts historiographical norms by offering a history arranged conceptually rather than chronologically. Goldman’s reader doesn’t need a timeline to understand the ways in which women musicians have engaged in meaningful dialogue with one another despite geographic barriers and persistent exclusion from a male-dominated industry. As Goldman illumines, part of crafting a feminist history involves breaking down the boundaries that define what a history looks like. If other histories draw vertical and horizontal connections between people and places, Goldman shows how she-punks are connected by spirals and flashing lightning bolts.
— Louder Than War

Goldman takes the reader on a whirlwind tour of feminist punk music that spans time and geography...Revenge of the She-Punks is ultimately a loving text written by someone who clearly cares about the topic, the art form, and the individuals involved. As such, it is likely to enchant those already interested in feminist punk music and even draw new devotees to the genre.
— Labour / Le Travail

[An] illuminating survey of women in punk from the genre's beginnings in the 1970s to the present...I especially like the jumping across time and space and that ‘punk’ is used in a wide sense, because it results in a diverse and lively book.
— NBHAP