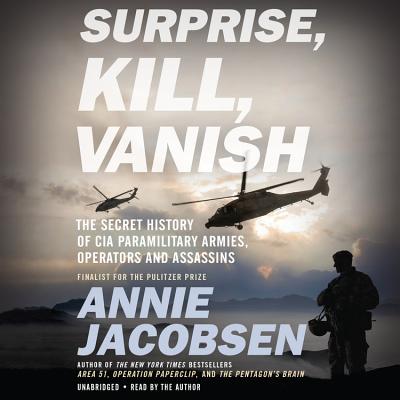 From Pulitzer Prize finalist Annie Jacobsen, the untold USA Today bestselling story of the CIA's secret paramilitary units.
Surprise . . . your target. Kill . . . your enemy. Vanish . . . without a trace.
When diplomacy fails, and war is unwise, the president calls on the CIA's Special Activities Division, a highly-classified branch of the CIA and the most effective, black operations force in the world.
Originally known as the president's guerrilla warfare corps, SAD conducts risky and ruthless operations that have evolved over time to defend America from its enemies. Almost every American president since World War II has asked the CIA to conduct sabotage, subversion and, yes, assassination.
With unprecedented access to forty-two men and women who proudly and secretly worked on CIA covert operations from the dawn of the Cold War to the present day, along with declassified documents and deep historical research, Pulitzer Prize finalist Annie Jacobsen unveils -- like never before -- a complex world of individuals working in treacherous environments populated with killers, connivers, and saboteurs.
Despite Hollywood notions of off-book operations and external secret hires, covert action is actually one piece in a colossal foreign policy machine.
Written with the pacing of a thriller, Surprise, Kill, Vanish brings to vivid life the sheer pandemonium and chaos, as well as the unforgettable human will to survive and the intellectual challenge of not giving up hope that define paramilitary and intelligence work. Jacobsen's exclusive interviews -- with members of the CIA's Senior Intelligence Service (equivalent to the Pentagon's generals), its counterterrorism chiefs, targeting officers, and Special Activities Division's Ground Branch operators who conduct today's close-quarters killing operations around the world -- reveal, for the first time, the enormity of this shocking, controversial, and morally complex terrain. Is the CIA's paramilitary army America's weaponized strength, or a liability to its principled standing in the world? Every operation reported in this book, however unsettling, is legal.

Annie Jacobsen was a contributing editor at the Los Angeles Times Magazine and is the author of the New York Times bestseller Area 51. A graduate of Princeton University, she lives in Los Angeles with her husband and two sons.

"In SURPRISE, VANISH, KILL, Annie Jacobsen takes us inside the darkest and most morally ambiguous corner of our government, where politicians ask brave men and women to kill-up close and personal-on America's behalf. She offers, in cinematic detail, the real story of recent geopolitical history, the plots and assassinations that in some instances presidents and diplomats have denied for years, including the CIA's biggest successes and its biggest fiascos."
—Garrett M. Graff, author of Raven Rock: The Story of the U.S. Government's Secret Plan to Save Itself--While the Rest of Us Die

"A behind-the-scenes look at the most shadowy corners of the American intelligence community...Well-sourced and well-paced, this book is full of surprises."
—Kirkus

"Having already demonstrated her remarkable aptitude for unearthing government secrets in books like Area 51 (2011) and The Pentagon's Brain (2015), Jacobsen pulls back the curtain on the history of covert warfare and state sanctioned assassinations from WWII to the present...Jacobsen's work revealing a poorly understood but essential slice of warfare history belongs in every library collection."—Booklist

Praise for The Pentagon's Brain

One of The Washington Post's Notable Nonfiction Books of 2015

One of The Boston Globe's Best Books of 2015

"Filled with the intrigue and high stakes of a spy novel, Jacobsen's history of DARPA is as much a fascinating testament to human ingenuity as it is a paean to endless industrial warfare and the bureaucracy of the military-industrial complex."
—Kirkus

"A fascinating and unsettling portrait of the secretive U.S. government agency....Jacobsen walks a fine line in telling the story of the agency and its innovations without coming across as a cheerleader or a critic, or letting the narrative devolve into a salacious tell-all. Jacobsen's ability to objectively tell the story of DARPA, not to mention its murky past, is truly remarkable, making for a terrifically well-crafted treatise on the agency most Americans know next to nothing about."
—Publishers Weekly (starred review)

"Jacobsen offers a definitive history of the clandestine agency.... She explores the implications of DARPA work on technology that will not be widely known to the public for generations but will certainly impact national security and concepts of war."
—Vanessa Bush, Booklist (starred review)

One of The Washington Post's most anticipated books of 2017

One of USA Today's New and Noteworthy Picks!


"With Phenomena, Annie Jacobsen has once again produced an utterly absorbing and brilliantly reported chronicle that truly breaks new ground. This is a boundary-breaking story of mental phenomena-extra sensory perception techniques-that is truly a pleasure to read. A mind-bending triumph!"—Alex Kershaw, bestselling author of The Liberator and Avenue of Spies

"Richly researched.... Jacobsen shows that, in the face of inexplicable events, even 'the most pragmatic, commonsense thinkers found themselves uncertain.'"
—The New Yorker

"Annie Jacobsen has written an entertaining narrative of the many salaried people in our government who have supported the exploration of psychic phenomena....Much of the information presented is already known, but Jacobsen has accomplished the gargantuan feat of bulldozing it all into one place. She has a keen eye for amusing anecdotes, and writes them up with convincing detail. More than that, Jacobsen has arranged her story in a kind of nonfiction picaresque novel."
—Dick Teresi, New York Times Book Review

"Annie Jacobsen is back with a new tome that should entice anyone who doesn't mind thinking outside the box; or as referenced in her book, as if there is no box.... A well researched and fascinating tale.... It's everything you could possibly want"
—Simon Constable, Forbes

"The most in depth account yet of the lives of Paperclip recruits and their American counterparts.... Jacobsen deftly untangles the myriad German and American agencies and personnel involved...more gripping and skillfully rendered are the stories of American and British officials who scoured defeated Germany for Nazi scientists and their research."—New York Times Book Review

"With Annie Jacobsen's OPERATION PAPERCLIP for the first time the enormity of the effort has been laid bare. The result is a book that is at once chilling and riveting, and one that raises substantial and difficult questions about national honor and security...This book is a remarkable achievement of investigative reporting and historical writing."
—Boston Globe