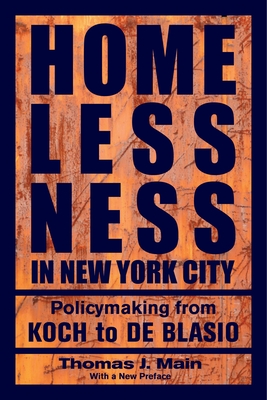 Can American cities respond effectively to pressing social problems? Or, as many scholars have claimed, are urban politics so mired in stasis, gridlock and bureaucratic paralysis that dramatic policy change is impossible? Homelessness in New York City tells the remarkable story of how America's largest city has struggled for more than thirty years to meet the crisis of modern homelessness through the landmark development, since the initiation of the Callahan v Carey litigation in 1979, of a municipal shelter system based on a court-enforced right to shelter.

New York City now shelters more than 50,000 otherwise homeless people at an annual cost of more than $1 billion in the largest and most complex shelter system in the world. Establishing the right to shelter was a dramatic break with long established practice. Developing and managing the shelter system required the city to repeatedly overcome daunting challenges, from dealing with mentally ill street dwellers to confronting community opposition to shelter placement. In the course of these efforts many classic dilemmas in social policy and public administration arose. Does adequate provision for the poor create perverse incentives? Can courts manage recalcitrant bureaucracies? Is poverty rooted in economic structures or personal behavior? The tale of how five mayors-Koch, Dinkins, Giuliani, Bloomberg and de Blasio-have wrestled with these problems is one of caution and hope: the task is difficult and success is never unqualified, but positive change is possible.