Far from the Tree: Young Adult Edition--How Children and Their Parents Learn to Accept One Another . . . Our Differences Unite Us (Paperback) 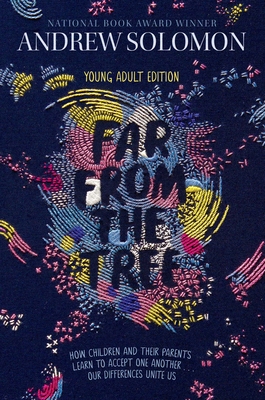 Far from the Tree: Young Adult Edition--How Children and Their Parents Learn to Accept One Another . . . Our Differences Unite Us (Paperback)


We can usually get this book in 3 to 7 days, except during a pandemic. We are doing our best
From New York Times bestselling author Andrew Solomon comes a stunning, poignant, and affecting young adult edition of his award-winning masterpiece, Far from the Tree, which explores the impact of extreme differences between parents and children.

The old adage says that the apple doesn’t fall far from the tree, meaning that children usually resemble their parents. But what happens when the apples fall somewhere else—sometimes a couple of orchards away, sometimes on the other side of the world?

In this young adult edition, Andrew Solomon profiles how families accommodate children who have a variety of differences: families of people who are deaf, who are dwarfs, who have Down syndrome, who have autism, who have schizophrenia, who have multiple severe disabilities, who are prodigies, who commit crimes, and more.

Elegantly reported by a spectacularly original and compassionate thinker, Far From the Tree explores how people who love each other must struggle to accept each other—a theme in every family’s life. The New York Times calls the adult edition a “wise and beautiful” volume that “will shake up your preconceptions and leave you in a better place.”
Andrew Solomon is a professor of psychology at Columbia University, president of PEN American Center, and a regular contributor to The New Yorker, NPR, and The New York Times Magazine. A lecturer and activist, he is the author of Far and Away: Essays from the Brink of Change: Seven Continents, Twenty-Five Years; the National Book Critics Circle Award-winner Far from the Tree: Parents, Children, and the Search for Identity, which has won thirty additional national awards; and The Noonday Demon; An Atlas of Depression, which won the 2001 National Book Award, was a finalist for the Pulitzer Prize, and has been published in twenty-four languages. He has also written a novel, A Stone Boat, which was a finalist for the Los Angeles Times First Fiction Award and The Irony Tower: Soviet Artists in a Time of Glasnost. His TED talks have been viewed over ten million times. He lives in New York and London and is a dual national. For more information, visit the author’s website at AndrewSolomon.com.

Laurie Calkhoven is the author of many books, including George Washington: An American Life and Harriet Tubman: Leading the Way to Freedom. She lives in New York City. Visit her at LaurieCalkhoven.com.
*PRAISE FOR THE ADULT EDITION OF FAR FROM THE TREE:

“An informative and moving book that raises profound issues regarding the nature of love, the value of human life, and the future of humanity.”
— Kirkus, starred review

"This is one of the most extraordinary books I have read in recent times—brave, compassionate and astonishingly humane. Solomon approaches one of the oldest questions—how much are we defined by nature versus nurture?—and crafts from it a gripping narrative. Through his stories, told with such masterful delicacy and lucidity, we learn how different we all are, and how achingly similar. I could not put this book down.”
— Siddhartha Mukherjee, Pulitzer Prize-winning author of The Emperor of All Maladies

“Solomon is a storyteller of great intimacy and ease…He approaches each family’s story thoughtfully, respectfully…Bringing together their voices, Solomon creates something of enduring warmth and beauty: a quilt, a choir.”
— Kate Tuttle