Loosed upon the World: The Saga Anthology of Climate Fiction (Paperback) 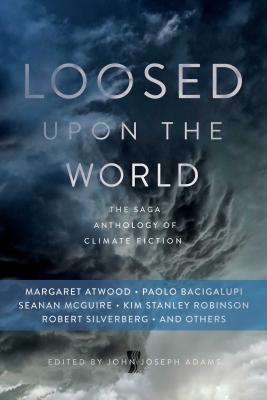 Loosed upon the World: The Saga Anthology of Climate Fiction (Paperback)

By John Joseph Adams (Editor)
List Price: $17.99
Our Price: $17.84
(Save: $0.15 1%)
On Our Shelves Now as of 24 Hours Ago. Call first to confirm.
Collected by the editor of the award-winning Lightspeed magazine, the first, definitive anthology of climate fiction—a cutting-edge genre made popular by Margaret Atwood.

Is it the end of the world as we know it? Climate Fiction, or Cli-Fi, is exploring the world we live in now—and in the very near future—as the effects of global warming become more evident. Join bestselling, award-winning writers like Margaret Atwood, Paolo Bacigalupi, Kim Stanley Robinson, Seanan McGuire, and many others at the brink of tomorrow. Loosed Upon the World is so believable, it’s frightening.
John Joseph Adams is the series editor of Best American Science Fiction & Fantasy. He is also the bestselling editor of many other anthologies, such as The Mad Scientist’s Guide to World Domination, Armored, Brave New Worlds, Wastelands, and The Living Dead. Recent books include The Apocalypse Triptych (consisting of The End is Nigh, The End is Now, and The End Has Come), and series editor for The Best American Fantasy and Science Fiction. John is a two-time winner of the Hugo Award and is a six-time World Fantasy Award finalist. John is also the editor and publisher of the digital magazines Lightspeed and Nightmare, and is a producer for WIRED’s The Geek’s Guide to the Galaxy podcast.