Family of Secrets: The Bush Dynasty, America's Invisible Government, and the Hidden History of the Last Fifty Years (MP3 CD) 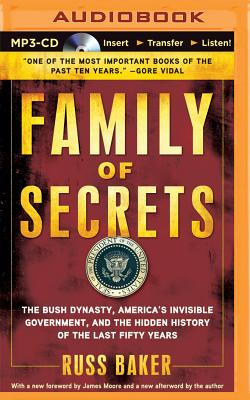 Family of Secrets: The Bush Dynasty, America's Invisible Government, and the Hidden History of the Last Fifty Years (MP3 CD)

Was the rise of the disastrous George W. Bush just a matter of family connections and sly, cynical operatives such as Karl Rove? Or was something more at work--something that endures beyond Bush's departure from Washington?

Award-winning investigative journalist Russ Baker provides the astonishing answers in Family of Secrets, a groundbreaking inquiry into the Bush dynasty and the shadowy elite that has quietly steered the American republic for the past half century and more. Baker shows how this network of figures in intelligence, the military, oil, and finance enabled--and in turn benefited handsomely from--the Bushes' perch at the highest levels of government. This deeply entrenched elite remains in power regardless of who sits in the Oval Office.

Family of Secrets punctures the conventional wisdom on both presidents Bush. It exposes the hidden truth behind W.'s purported religious conversion and the debacle of Hurricane Katrina, and reveals his secret motive for invading Iraq. It probes the murky history of "Poppy" Bush and his lifelong service to the intelligence apparatus. Ultimately, Family of Secrets is about much more than just the Bushes. It changes the way we comprehend postwar history--from the JFK assassination to Watergate--and compels us to take a new look at events now unfolding.