Years of Glory: Nelly Benatar and the Pursuit of Justice in Wartime North Africa (Hardcover) 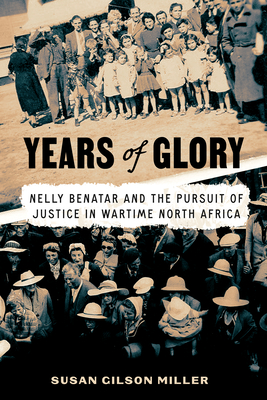 Years of Glory: Nelly Benatar and the Pursuit of Justice in Wartime North Africa (Hardcover)

The compelling true story of Nelly Benatar--a hero of the anti-Fascist North African resistance and humanitarian who changed the course of history for the last million escaping the Second World War.

When France fell to Hitler's armies in June 1940, a flood of refugees fleeing Nazi terror quickly overwhelmed Europe's borders and spilled across the Mediterranean to North Africa, touching off a humanitarian crisis of dizzying proportions. Nelly Benatar, a highly regarded Casablancan Jewish lawyer, quickly claimed a role of rescuer and almost single-handedly organized a sweeping program of wartime refugee relief. But for all her remarkable achievements, Benatar's story has never been told.

With this book, Susan Gilson Miller introduces readers to a woman who fought injustice as an anti-Fascist resistant, advocate for refugee rights, liberator of Vichy-run forced labor camps, and legal counselor to hundreds of Holocaust survivors. Miller crafts a gripping biography that spins a tale like a Hollywood thriller, yet finds its truth in archives gathered across Europe, North Africa, Israel, and the United States and from Benatar's personal collection of eighteen thousand documents now housed in the US Holocaust Museum.

Years of Glory offers a rich narrative and a deeper understanding of the complex currents that shaped Jewish, North African, and world history over the course of the Second World War. The traumas of genocide, the struggle for anti-colonial liberation, and the eventual Jewish exodus from Arab lands all take on new meaning when reflected through the interstices of Benatar's life. A courageous woman with a deep moral conscience and an iron will, Nelly Benatar helped to lay the groundwork for crucial postwar efforts to build a better world over Europe's ashes.

Susan Gilson Miller, Professor Emerita of History at the University of California, Davis, is the author of books on nineteenth- and twentieth-century North African history, including Disorienting Encounters (1992); In the Shadow of the Sultan (1998); Berbers and Others (2010), and The History of Modern Morocco (2013).