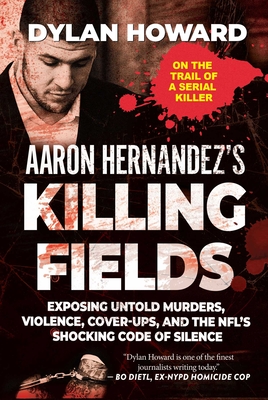 
This book has been declared out of stock indefinitely, so we are unlikely to be able to get it.
Further Details into the Criminal Life of a Former Football Star

From teenage gang member to $40 million star of the New England Patriots, from All-American college player to drug addict, murderer, dead by suicide in his jail cell at age twenty-seven…you think you know the Aaron Hernandez story? You don’t.

For the first time, Aaron Hernandez’s Killing Fields will reveal the real, hitherto unknown motive for the killing of Odin Lloyd—the only crime for which Hernandez was ever convicted and a revelation so shocking it will shake the foundations of the NFL itself. It will also unpick a pattern of violence and brutality stretching back to his time as a teenager at the University of Florida, revealing further shooting victims, evidence of his involvement in the double murder of Daniel Abreu and Safiro Furtado in 2012.

Featuring new interviews with Hernandez’s cellmates, serving police investigators, prosecutors, psychologists, attorneys—as well as key witnesses including Hernandez’s drug dealer, a male stripper he hired days before the killing of Lloyd—plus extensive testimony from relatives of Hernandez’s victims, Aaron Hernandez’s Killing Fields is the exhaustive, definitive account of the rise and fall of a man undone by his own appetite for violence, gangsterism, power, drugs, and self-destruction.

This is the real Aaron Hernandez story—and perhaps just the beginning of a whole new murder investigation.
As a man with unprecedented access to the facts and a reporter who is one of the most feared journalists in Hollywood, investigative reporter Dylan Howard has cracked open scandals that have brought down the careers of Mel Gibson, Charlie Sheen, Hulk Hogan, Paula Dean, and numerous others.

Howard’s sense for news saw him rise to become the undisputed most powerful gossip editor in the world, publishing dozens of salacious tabloid magazines each week, including Us Weekly, The National Enquirer, Star, In Touch, Life & Style, RadarOnline.com, and more.

Described by the New Yorker magazine’s Jeffrey Toobin as “a tabloid prodigy” and AdWeek as “the king of Hollywood scoops,” Dylan also brought to light: the hate-fueled audiotapes of Oscar-winning actor/director Gibson blasting former girlfriend Oksana Grigorieva; the scandal-plagued death of screen darling Farrah Fawcett; the naming of the mother of Arnold Schwarzenegger’s love child; the demise of star-on-the-rise politician Anthony Weiner; and the Tiger Woods sex scandal. He also broke the story of the A-list high-stakes poker scam that was later made into the Oscar-nominated film Molly’s Game.

Most recently, Howard made a name for himself with a stunning exposé of Sheen that revealed Hollywood’s most unapologetic hedonist was HIV positive. It also was a story of extraordinary corruption, violence, lies, intimidation, death threats, and millions of dollars paid out in hush money—a story that he chronicled in a first-person essay for The Hollywood Reporter that AdWeek called “jaw dropping.”

He also develops and executive produces premium unscripted television shows and podcasts, including last year's blockbuster podcast series "Fatal Voyage: The Mysterious Death of Natalie Wood” that garnered over 10 million downloads and 50 million media impressions worldwide. The series was named to Apple Podcasts' Most Downloaded New Shows of 2018 and was named a 2019 Webby Best Series honoree by the International Academy of Digital Arts and Sciences.

In 2011, Howard was named Entertainment Journalist of the Year at the National Entertainment Journalism Awards, where the judges labelled him the "go-to guy for authoritative showbiz news and analysis on cable and over-the air television." Howard is also the author of Diana: Case Solved and currently resides in New York City.
"Dylan Howard is the rare combination of cutting-edge journalist, true crime commentator, and relentless investigator. Howard passionately brings comprehensive and groundbreaking analysis to the most compelling mysteries of our time."
— Dr. Phil McGraw, host of TV's #1 daytime talk show, Dr. Phil

“The king of Hollywood scoops.”
— AdWeek

“Dylan Howard is one of the finest journalists writing today. His depth and breadth of experience are second to none; he follows every intricate angle of a story and exposes the truth. As a former detective, I know firsthand the skills that make an exceptional investigator and Dylan has them in spades.”
—Bo Dietl, former NYPD homicide detective who made over made over 1,400 felony arrests