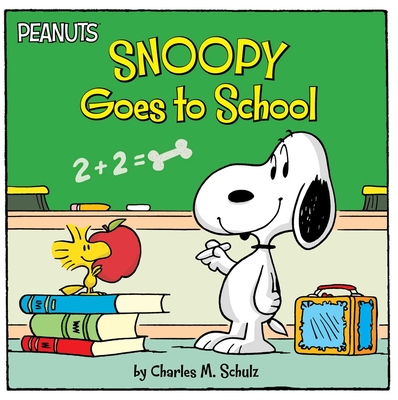 On Our Shelves Now as of 24 Hours Ago. Please call first to confirm.

Celebrate the back-to-school season with Snoopy, Charlie Brown, and the rest of the Peanuts gang in this 8x8 storybook!

Snoopy is visiting school for a day! He gets to go to Charlie Brown’s class to participate in show-and-tell. While he’s there, he aces a quiz and learns that school is a lot more fun than dog obedience training!

© 2020 Peanuts Worldwide LLC
Charles M. Schulz is a legend. He was the hand and heart behind fifty years of Peanuts, which featured one of the world’s most beloved and recognizable casts of cartoon characters, until his death in 2000.

With over thirty years in animation, comic books, magazine illustration, and children’s books, Robert Pope’s family has seen a great deal of the back of his head. Robert currently illustrates the Peanuts gang for both BOOM comics and Simon Spotlight’s Ready-to-Read series. He also pencils Looney Tunes for DC comics! Robert has drawn for Scooby-Doo, Batman: The Brave and the Bold, Space Ghost Coast to Coast, Johnny Bravo, The Powerpuff Girls, Foster’s Home for Imaginary Friends, The Grim Adventures of Billy and Mandy, and many others for both comics and animation.