Prepare and Defend: Keep Yourself and Others Safe from Mass Murder Attacks (Hardcover) 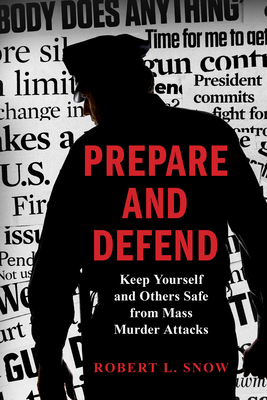 Prepare and Defend: Keep Yourself and Others Safe from Mass Murder Attacks (Hardcover)


This book has been declared out of stock indefinitely, so we are unlikely to be able to get it.
A Police Officer's Crucial Insights to Mass Murder in America: How to Keep Yourself and Others Safe gives readers the insider knowledge unavailable anywhere else that could ultimately save their lives. Mass murders, though they may seem to be a recent phenomenon, actually have a long history in America. Snow gives a short history of mass murders in the United States, showing while mass murders may be more common today; they were hardly unheard of in the past. Almost weekly, it seems the national news media reports another mass murder: a school shooting, a massacre at a country music concert, a rampage at a nursing home. Why is this happening; who carries out these mass murders; how can we survive if caught up in one; and what can be done by our nation to stop them? In A Police Officer's Crucial Insights to Mass Murder in America: How to Keep Yourself and Others Safe Robert L. Snow answers these tough questions by examining the psychological make-up of mass murderers, allowing the readers to see into the many motivations behind these crimes. He also discusses the various strategies that communities can use to lessen the chances of such events occurring, and what the United States needs to do to prevent these tragedies from continuing. An important aspect of A Police Officer's Crucial Insights to Mass Murder in America is showing readers how to spot a likely mass murder before it happens, and how, if caught up in one, to survive it with the right tactics. Because of the increase in the number of mass murders during the past few decades, police departments everywhere have become equipped and trained on how to respond to them. Readers need to know this information as well so that they can be rescued quickly and safely if ever in the face of this kind of situation. Depending on what kind of mass murder event occurs, there are a number of strategies that can significantly lessen a person's chances of becoming a victim. With the benefit of many years as a police office, as well as response training for mass murder episode, Snow shows readers important strategies and how to use them.
Robert L. Snow served as a police officer with the Indianapolis Police Department for more than thirty-eight years, retiring in 2007 with the rank of captain. During his time at the police department he served in such capacities as Captain of Detectives, Police Department Executive Officer, Commander of the Homicide Branch, and Commander of the Organized Crime Branch. Snow has also been a published writer for almost forty years. He has had more than one hundred articles and short stories published in such national magazines as Playboy, Reader's Digest, the National Enquirer, Action Digest, Police, and many others. In addition he has written twenty books, including Finding Runaways and Missing Adults (R&L, 2012); Policewomen Who Made History (R&L, 2010); Protecting Your Life, Home, and Property (1995); SWAT Teams (1996); Family Abuse (1997); Stopping A Stalker (1998); The Militia Threat (1999); Looking for Carroll Beckwith (1999); Deadly Cults: The Crimes of True Believers (2003); Murder 101 (2005); Sex Crimes Investigation (2006); Technology and Law Enforcement (2007); Child Abductions: Prevention, Investigation, and Recovery (2008); Slaughter on North LaSalle (2012); Killers in the Family (2014); and Love and Greed in the Heartland (2017).