Together We Rise Lib/E: Behind the Scenes at the Protest Heard Around the World (Compact Disc) 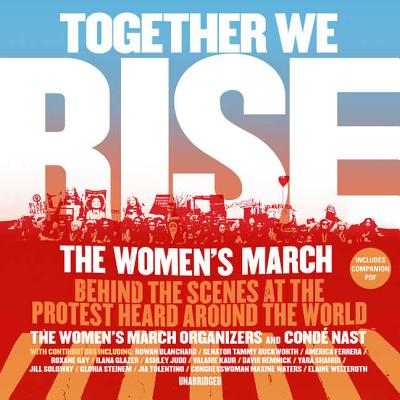 Together We Rise Lib/E: Behind the Scenes at the Protest Heard Around the World (Compact Disc)

By Kateri Akiwenzie-Damm (Read by), Cond Nast, The The

On January 21, 2017, the day after Donald J. Trump's inauguration, more than three million marchers of all ages and walks of life took to the streets as part of the largest protest in American history. In red states and blue states, in small towns and major urban centers, from Boise to Boston, Bangkok to Buenos Aires, people from eighty-two countries--on all seven continents--rose up in solidarity to voice a common message: Hear our voice.

It became the largest global protest in modern history.

Compiled by Women's March organizers, in partnership with Cond Nast and Glamour magazine Editor in Chief Cindi Leive, Together We Rise--published for the one-year anniversary of the event--is the complete chronicle of this remarkable uprising. For the first time, Women's March organizers--including Bob Bland, Cassady Fendlay, Sarah Sophie Flicker, Janaye Ingram, Tamika Mallory, Paola Mendoza, Carmen Perez, and Linda Sarsour --tell their personal stories and reflect on their collective journey in an oral history written by Jamia Wilson, writer, activist and director of The Feminist Press. They provide an inside look at how the idea for the event originated, how it was organized, how it became a global movement that surpassed their wildest expectations, and how they are sustaining and building on the widespread outrage, passion, and determination that sparked it.

Together We Rise interweaves their stories with Voices from the March--recollections from real women who were there, across the world, and voiced by January LaVoy--and 22 short, thought-provoking essays by esteemed writers, celebrities and artists including those both written and read by Ashley Judd, Jia Tolentino, Cindi Leive, Kateri Akiwenzie-Damm, Sister Aisha Al-Adawiya, Melanie Campbell, Judith LeBlanc, and Ai-Jen Poo. It also features the talented voices of Robin Miles as the narrator, Th r se Plummer, and James Fouhey. An inspirational call to action that reminds us that together, ordinary people can make a difference, Together We Rise is an unprecedented look at a day that made history--and the beginning of a resistance movement to reclaim our future.

Women's March will share proceeds from Together We Rise with three grassroots, women-led organizations: The Gathering for Justice, SisterSong Women of Color Reproductive Justice Collective, and Indigenous Women Rise.