Once Upon a Christmas (Hardcover) 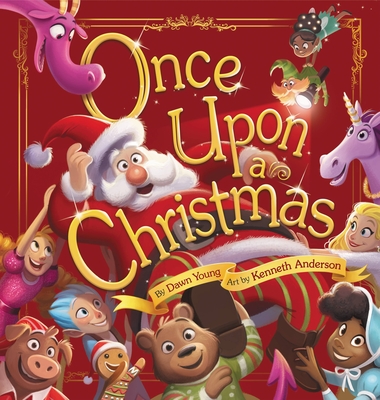 Once Upon a Christmas (Hardcover)


We can usually get this book in 3 to 7 days, except during a pandemic. We are doing our best
Turn "Ho ho ho" into "Ha ha ha" with this zany Christmas picture book featuring Santa, Bigfoot, Little Red Riding Hood, unicorns, dragons, and more!  In Once Upon a Christmas, the Three Bears' Christmas party gets off to a rocky start: Bigfoot can't stop photobombing, the dragon burns the fruitcake, and Jack Frost inadvertently triggers the storm of the century--knocking Santa's sleigh off course and straight into a lake! A soaked St. Nick finds eager helpers in the partygoers, a varied cast of mythical creatures and familiar fictional favorites. The unlikely team rescues the sleigh, just in time to continue the festivities and get Santa on his merry way. Humorous twists and action-packed illustrations will make this story an instant family classic for the Christmas season.
Dawn Young is the author of four picture books, including the Night Baafore series with WorthyKids. She has a degree in mechanical engineering and an MBA; she worked for many years for a large aerospace company. Her technical education, background, and experience have inspired her to write STEM stories that teach and entertain. Dawn is an active member of SCBWI and many other children's writing groups. She lives in Glendale, Arizona.
Kenneth Anderson is an illustrator and character designer based in the UK. He has worked in games development, animation, and character and set design for children's television shows, in addition to illustration work. He has fond childhood memories of playing games like Monkey Island and Day of the Tentacle, reading Calvin and Hobbes and watching Ninja Turtles and Wallace and Gromit. He channels these early influences into his work, focusing on creating story- and character-driven pieces with a bit of humor and some occasional wackiness to boot. Kenneth lives in Glasgow, UK.