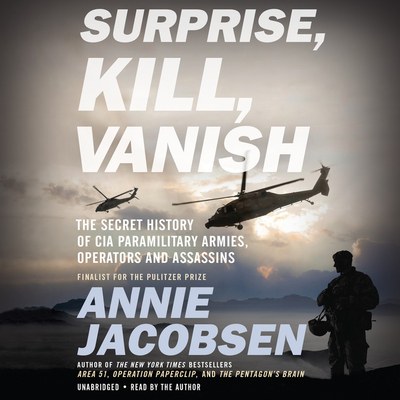 By Annie Jacobsen (Read by)


This book has been declared out of stock indefinitely, so we are unlikely to be able to get it.
The definitive, character-driven history of CIA covert operations and U.S. government-sponsored assassinations, from the author of the Pulitzer Prize finalist The Pentagon's BrainSince 1947, domestic and foreign assassinations have been executed under the CIA-led covert action operations team. Before that time, responsibility for taking out America's enemies abroad was even more shrouded in mystery. Despite Hollywood notions of last-minute rogue-operations and external secret hires, covert action is actually a cog in a colossal foreign policy machine, moving through, among others, the Bureau of Intelligence and Research, the House and Senate Select Committees. At the end of the day, it is the President, not the CIA, who is singularly in charge.When diplomacy fails and overt military action is not feasible, the President often calls on the Special Activities Division, the most secretive and lowest-profile branch of the CIA. It is this paramilitary team that undertakes dramatic and little-known assignments: hostage rescues, sabotage, and, of course, assassinations. For the first time, Pulitzer Prize finalist and New York Times bestselling author Annie Jacobsen takes us deep inside this top-secret history. With unparalleled access to former operatives, ambassadors, and even past directors of the Secret Service and CIA operations, Jacobsen reveals the inner workings of these teams, and just how far a U.S. president may go, covertly but lawfully, to pursue the nation's interests.