Rebellion in the Mohawk Valley: The St. Leger Expedition of 1777 (Paperback) 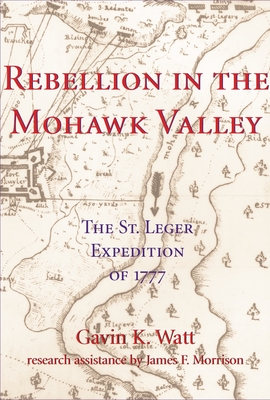 Rebellion in the Mohawk Valley: The St. Leger Expedition of 1777 (Paperback)

In the summer of 1777, while the British and the Americans were engaged in the bitter American Revolution, a massive campaign was launched from Canada into New York State.

Brigadier Barry St. Leger led a crucial expedition from Lake Ontario into the Mohawk Valley. The goal was to travel by waterways to join Lieutenant General John Burgoyne in the siege of Albany. But Leger encountered obstacles along the way. While laying siege to Fort Stanwix, Leger received word that Benedict Arnold was leading a massive relief column that was headed their way. Leger and his men retreated, and despite a later attempt to carry on, were never able to help Burgoyne. The Americans then destroyed the British-held Fort Ticonderoga, marking the end of the campaign.

The results of the failed St. Leger expedition were historic. Not only was the loss of Fort Ticonderoga was a major blow to the British war effort, but the campaign also brought about the disillusionment of the Iroquois Confederacy, and saw the founding of the infamous Butler's Rangers and the first major campaign of Sir John Johnson's King's Royal Regiment.

Gavin K. Watt is president of the Museum of Applied Military History, a confederation of some 450 volunteer historical animators, but he is perhaps best known as a founder and commanding officer of the recreated King's Royal Yorkers. He is the author of Burning of the Valleys: Daring Raids from Canada against the New York Frontier in the Fall of 1780 (Dundurn, 1996).

"Watt's account [is] well worth the effort. He assists the reader with maps and a 'comparative chronology,' as well as a substantial index. This book, 'twenty-five years in the making' according to the author, will be a definitive account of the St Leger expedition."

"Gavin Watt is known for his exhaustively researched and meticulously referenced accounts of early Canadian history. He never lets that get in the way of readability, however, and this account of one episode during the American Revolution follows in that tradition." - Canadian Military History Book Review Supplement, Summer 2004