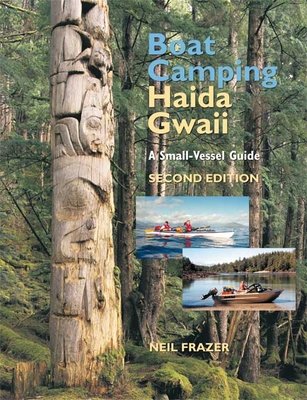 
We can usually get this book in 3 to 7 days, except during a pandemic. We are doing our best
With information on ancient native settlements, hidden campsites and everything in between, Boat Camping Haida Gwaii is a fascinating and comprehensive guide to this wild and beautiful archipelago, written especially for kayakers and other small vessel operators. The book has
a wide range of informative maps and photographs of the north, south, east and west coasts, as well as Masset Inlet and Kunghit Island. Detailed descriptions are given of each campsite, and special appendices are provided with helpful hints on bear safety, tides and currents. The book also contains invaluable information about the history and culture of the Haida, the indigenous people of Haida Gwaii, with an extensive bibliography.

This guide will be valuable to kayakers, canoeists, those in small motorboats and everyone interested in exploring this unique area.

Neil Frazer was born in Comox on Vancouver Island in 1948. Neil earned an engineering degree from the University of British Columbia, and a PhD in geophysics from Princeton University. He is currently a professor of geophysics at the University of Hawaii at Manoa. In Hawaii, a kayak is his vessel, but for the past ten summers Neil has used small open motorboats to explore the outer coasts and the inlets from Puget Sound to Glacier Bay. This book is the result of four voyages around the Queen Charlotte Islands from Langara Island in the north to Sgan Gwaii and Rose Harbour in the south. Neil lives in Kailua, Hawaii with his wife and their three teenage children.