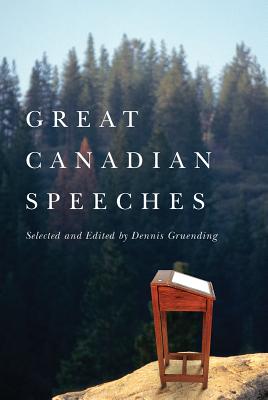 A collection of the most powerful and moving oratory that Canada has to offer.

Throughout history, men and women of great eloquence have persuaded their contemporaries to build nations, to make war and create peace, to sway judges and juries, to celebrate the accomplishments of the living, and to mourn for the dead.

Canada has had more than its share of great orators, individuals who have used their rhetorical powers to explore important issues faced by our nation: Confederation, relations between peoples, human rights, the economy, culture, our international relationships, particularly with the United States, but also our role in the larger and developing world.

Great Canadian Speeches is a thought-provoking collection of the finest speeches in Canadian history, among them:

Dennis Gruending is a former Member of Parliament from Saskatchewan. A journalist by profession, he has worked for three newspapers and as a producer and host for CBC Radio in western Canada. He is the author of four previous books, including biographies of Emmett Hall and Allan Blakeney, and The Middle of Nowhere. His articles, stories, and poems have appeared in NeWest Review, The Canadian Forum, New Internationalist, Maclean's, and Reader's Digest.