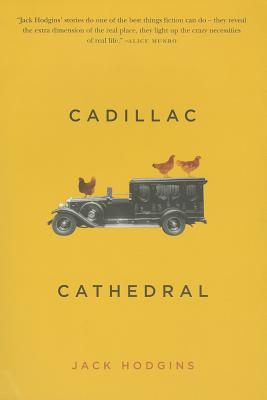 
On Our Shelves Now as of 24 Hours Ago. Call first to confirm.
In Jack Hodgins' new novel, Cadillac Cathedral, he is at his humorous best in describing the eccentric but lovable characters in the little town of Portuguese Creek on Vancouver Island. Arvo is the main figure, a Finn who has worked in logging camps all his life and who now spends his retirement fixing old cars, often ones that he finds discarded in the bush. Along with Arvo there is a collection of friends who meet at Arvo's garage to discuss the world as it passes by on the highway. When news arrives that one of their oldest friends has died, Arvo and his friends decide to drive down island to pick up the body and give it a decent send-off. A road trip ensues, but this is not just any road trip, for it takes place in a refurbished Cadillac Cathedral, a remarkable hearse built by Cadillac in the 1930s and which has been discovered in the hills where it has been used as a skidder for pulling logs. On the way south, at a slow pace as befits the stately Cadillac Cathedral, the friends encounter adventures that create detours into country life. We learn about the unusual marriages that keep couples apart and together, as well as how male camaraderie develops. There is also a winsome widow with her eye on Arvo as they make the journey south together, and another mysterious widow in the capital for whom it seems that Arvo may still have a soft spot. The journey ends back in Portuguese Creek, with a party that brings the entire community together in a wake to end all wakes. Cadillac Cathedral grew out of a song narrative that Hodgins wrote for Chor Leoni to perform in January 2014.