So Far So Good (Paperback) 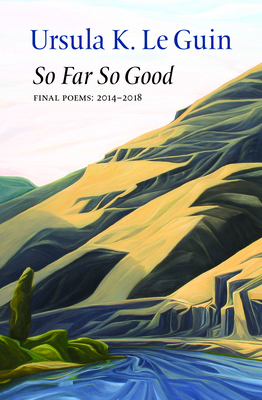 So Far So Good (Paperback)

Legendary author Ursula K. Le Guin was lauded by millions for her ground- breaking science fiction novels, but she began as a poet. Le Guin wrote across genres for her entire career, and poetry was a cardinal mode of expression―offering a path that led readers to discover her voice at close, intimate range. In this clarifying and sublime collection―completed shortly before her death in 2018―Le Guin is unflinching in the face of mortality, and full of wonder for the mysteries beyond. Redolent of the lush natural beauty of the Pacific Northwest, with rich sounds playfully echoing myth and nursery rhyme, So Far So Good lovingly plays tribute to the memories, friendships, and timeless questions that comprised a spectacular and generous life. With profound wisdom and tenacious levity, a true literary hero bookends a long, daring, and prolific career. As Publishers Weekly hailed in a starred review of So Far So Good, " Le Guin's] writings and convictions were driven by a big heart--the heart of a poet who knew all too well the difference between miracle and eureka, revelation and revolution.
Ursula K. Le Guin (1929-2018) is the author of over sixty novels, short fiction works, translations, and volumes of poetry. She is known mostly for her works of science fiction and fantasy, including the acclaimed novels The Left Hand of Darkness, and The Dispossessed. Le Guin is the recipient of numerous awards and honors, and her books continue to sell millions of copies worldwide. The documentary Worlds of Ursula K. Le Guin, directed by Arwen Curry, was released theatrically in 2018, and a biography of Le Guin's life and work, by Julie Phillips, is forthcoming.