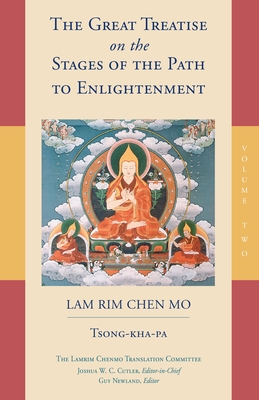 
This book has been declared out of stock indefinitely, so we are unlikely to be able to get it.
The second volume of the 15th-century spiritual classic that condenses Buddhist teachings into one easy-to-follow meditation manual

The Great Treatise on the Stages of the Path to Enlightenment (Tib. Lam rim chen mo) is one of the brightest jewels in the world’s treasury of sacred literature. The author, Tsong-kha-pa, completed it in 1402, and it soon became one of the most renowned works of spiritual practice and philosophy in the world of Tibetan Buddhism. Because it condenses all the exoteric sūtra scriptures into a meditation manual that is easy to understand, scholars and practitioners rely on its authoritative presentation as a gateway that leads to a full understanding of the Buddha’s teachings.

Tsong-kha-pa took great pains to base his insights on classical Indian Buddhist literature, illustrating his points with classical citations as well as with sayings of the masters of the earlier Kadampa tradition. In this way the text demonstrates clearly how Tibetan Buddhism carefully preserved and developed the Indian Buddhist traditions.

This first of three volumes covers all the practices that are prerequisite for developing the spirit of enlightenment (bodhicitta).
Je Tsong-Kha-Pa (1357–1419), founder of the Gelug school of Tibetan Buddhism, was one of Tibet's greatest philosophers and a prolific writer. His most famous work, The Great Treatise on the Stages of the Path, is a classic of Tibetan Buddhism.

The Lamrim Chenmo Translation Comittee is composed of José Cabezón, Daniel Cozort, Joshua W. C. Cutler, Natalie Hauptman, Roger R. Jackson, Karen Lang, Donald S. Lopez Jr., John Makransky, Elizabeth S. Napper, Guy Newland, John Newman, Gareth Sparham, B. Alan Wallace, and Joe B. Wilson.
"Of the many works of the Tibetan master Tsong-kha-pa, none compare in terms of popularity and breadth of influence with his Great Treatise, which has been treasured by practitioners and scholars alike for centuries. What distinguishes it as one of the principal texts of Mahayana Buddhism is its scope and clarity. It expounds the entire path from the way one should rely on a spiritual teacher, which is the very root, right up to the attainment of Buddhahood, which is the final fruit. The various stages of the path are presented so clearly and systematically that they can be easily understood and are inspiring to put into practice."—H.H. the Dalai Lama

“One of the greatest religious or secular works in the library of our human heritage.”
—Robert A. F. Thurman, Professor of Indo-Tibetan Buddhist Studies, Columbia University

"The present translation in three volumes is a remarkable accomplishment and a great gift to all students and practitioners of Vajrayana. The teachings, given open-handedly in this key text, are essential for anyone hoping to enter into or attain success in the higher (Tantric) stages of the path. The wisdom found in the nearly 1,200 pages of this work is truly astonishing and liberating. As Robert Thurman mentions in his foreword, Je Tsong-kha-pa's treatise can cause a 'paradigm shift' in the reader from a self-centered individual concerned with his own happiness to a bodhisattva for whom the happiness of others has become an ultimate concern. May it be so!"—Georg Feuerstein, author of The Encyclopedia of Yoga and Tantra

"As timely and radiant as ever. An indispensable work for Buddhists of all stripes."—Tricycle

"This is a classic of religious thought and is essential for libraries with a demonstrated interest in Buddhism or comparative religion. It should also be considered for all larger research collections and public libraries."—Library Journal