The Western Mysteries: An Encyclopedic Guide to the Sacred Languages & Magickal Systems of the World (Key of It All #2) (Paperback) 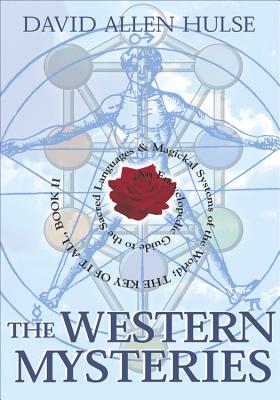 The Western Mysteries: An Encyclopedic Guide to the Sacred Languages & Magickal Systems of the World (Key of It All #2) (Paperback)

This is book number 2 in the Key of It All series.

The uniting factor of this book is language. It begins with a discussion of the mysteries of the Greek alphabet, followed by the different forms of the Runes, and goes on to describe the mystical secrets of Latin. It also explores Enochian, where you will discover, for the first time ever, the correctly constructed Watchtower system.

The book also includes the mysteries of the Tarot, a pictorial language, and it describes the development of the esoteric Tarot, how to do readings, and the significance of the symbolism on the Tarot cards. It concludes with the English language and its relationship to the Tarot, Enochian, and more.

The introduction to The Western Mysteries serves as a complete introduction to the magickal tradition of the West. You will learn about the evolution of thought concerning the Elements, astrology, magick squares, geomancy, words of power, and more.

You will find that each section of this book is a key that unlocks the meaning behind another of the magickal languages that you can relate to your own spiritual system. It is ideal for a beginning student to explore the mysteries of Western magick. It is a necessary tool for more advanced students, as it has collected hundreds of charts and lists which clarify and identify the similarities and differences between various systems.

This is a reference book you will study over and over. The volume of information revealed makes The Western Mysteries an instant classic and a necessity for any spiritual practitioner.

From an early age, David Allen Hulse diligently studied the alphabets of the ancient world. As a child, David possessed a great affinity for the alphabets of Egypt, Phoenicia, and Greece. In college, a reading of MacGregor Mathers' Kabbalah Unveiled opened up the Hebrew alphabet-number technique of Qabalistic research. After Hebrew, many other ancient languages were decoded and studied, including Sanskrit and Tibetan. In 1979, a discovery led to the need to capture the extent of all prior Quabalistic research into one great reference work. Research is still being carried out to discover new definitions for the number series as well as new magickal systems.