Serial Killers: The Minds, Methods, and Mayhem of History's Most Notorious Murderers (Paperback) 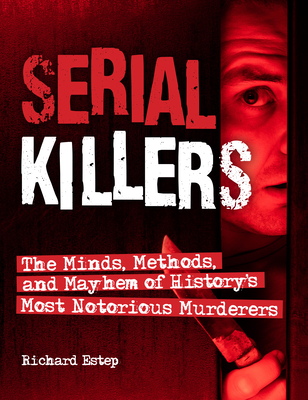 Serial Killers: The Minds, Methods, and Mayhem of History's Most Notorious Murderers (Paperback)


We can usually get this book in 3 to 7 days, except during a pandemic. We are doing our best
Pain, torment, and torture. Cruelty, brutality, and violence. The twisted psyches, murder. and yes, even the ability to charm people. Take a deep dive into the terrifyingly real serial murderers, spree killers, and true faces of evil

They prey on the innocent with a malicious desire to inflict damage and harm. They hunt and stalk misfortunate victims in the dark, in broad daylight, in quiet neighborhoods, and in the local woods. Their bloodthirst isn't satisfied after their first kill. Or their second. Or third. Serial Killers: The Minds, Methods, and Mayhem of History's Most Notorious Murderers delves into the global phenomenon of serial and spree murderers.

This chilling book looks at the horrifying stories of forty malevolent killers and hundreds of innocent victims, including such notorious homicidal maniacs as John Wayne Gacy, Ted Bundy, and Jeffery Dahmer, but it also looks at lesser-known and overlooked murderers like Herbert Baumeister, America's I-70 Strangler; Japan's "Anime Killer," Tsutomu Miyazaki; Russia's "Rostov Ripper," Andrei Chikatilo; the "Giggling Granny," Nannie Doss; and many more. It journeys to 16th-century Scotland to meet a clan of cannibals whose existence is still debated by historians today, and to the fog-shrouded alleys of Whitechapel, London, where Jack the Ripper earned his grisly namesake. Along the way, we'll meet the Dating Game Killer, the Milwaukee Cannibal, the Acid Bath Murderer, and other monsters.

What makes a seemingly ordinary person stalk, torture, and murder their fellow human beings? Are serial killers born or made? What is the difference between a serial killer and a spree killer? What were the identities of Jack the Ripper and the Zodiac Killer? Was Albert DeSalvo really the Boston Strangler? Is it possible that you could know a serial killer?

Caution is advised before entering the alarming world of twisted psychos and sociopaths With more than 120 photos and graphics, this fright-filled tome is richly illustrated. Its helpful bibliography and extensive index add to its usefulness.