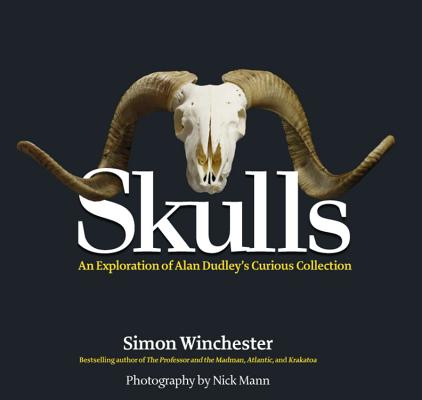 By Nick Mann (By (photographer)), Simon Winchester
$29.95
Special Order -- These books can be hard for us to get

Skulls is a beautiful spellbinding exploration of more than 300 different animal skulls­—amphibians, birds, fish, mammals, and reptiles—written by New York Times bestselling author, Simon Winchester and produced in collaboration with Theodore Gray and Touch Press, the geniuses behind The Elements and Solar System.

In Skulls, best-selling author Simon Winchester (author of The Professor and the Madman; Atlantic: A Biography of the Ocean; Krakatoa: The Day the World Exploded; and others)tells the rich and fascinating story of skulls, both human and animal, from every perspective imaginable: historical, biographical, cultural, and iconographic. Presenting details about the parts of the skull (including the cranium, the mandible, the shape and positioning of the eye sockets, and species-specific features like horns, teeth, beaks and bills), information about the science and pseudoscience of skulls, and a look at skulls in religion, art and popular culture, his stories and information are riveting and enlightening.

At the center of Skulls is a stunning, never-before-seen-in-any-capacity, visual array of the skulls of more than 300 animals that walk, swim, and fly. The skulls are from the collection of Alan Dudley, a British collector and owner of what is probably the largest and most complete private collection of skulls in the world. Every skull is beautifully photographed to show several angles and to give the reader the most intimate view possible. Each includes a short explanatory paragraph and a data box with information on the animal's taxonomy, behavior, and diet.

Skulls was published in December 2011 as an e-book for the iPad by the innovative e-book publishers Touch Press, creators of the best-selling e-books for iPad The Elements and Solar System. Both books were also published in print by Black Dog & Leventhal.

Nick Mann is the photographer of The Elements: A Visual Exploration of Every Known Atom in the Universe. Aside from having photographed more elements and compounds than probably anyone in the world, he is an accomplished landscape, sports, and event photographer. He lives in Urbana, Illinois.

Simon Winchester is the bestselling author of The Professor and the Madman, The Map that Changed the World, Krakatoa, A Crack in the Edge of the World and more than a dozen other books. His work has appeared in Conde Nast Traveler, Smithsonian, National Geographic and elsewhere. Mr. Winchester was made Officer of the Order of British Empire (OBE) by HM The Queen in 2006. He lives in New York City and Massachusetts.

Digging deep into Alan Dudley's collection of more than 2,000 skulls, Winchester (The Professor and the Madman) and photographer Mann highlight the rarest and most unusual of the vaunted cranium connoisseur's world-class assortment (which is housed cozily in a spare upstairs bedroom in his home in England). Grouping the skulls according to species, Winchester enthusiastically educates armchair osteologists on the peculiarities of key subspecies, enabling readers, should the need arise, to tell a long-nosed bandicoot from a southern brown bandicoot, the bizarrely horned babirusa from a warthog, or the fearsome (and extinct) saber-toothed cat from a modern (endangered) tiger. Though some, like the hard-to-find elephant skull, are replicas, the vast majority are the real thing, including that of the extinct dodo bird. Winchester rounds out the book with various essays on topics such as the use of skulls in artwork, phrenology, and other related subjects with varying degrees of success. Prone to wordiness, he's at his best offering short takes on his subjects or tips on DIY skull collecting. Mann's crisp, reverential photography more than makes up for the volume's literary shortcomings, making this one coffee-table book that's hard to resist.

This is a gorgeous, coffee-table book that will the delight the heart... I loved this book. A real treasure.