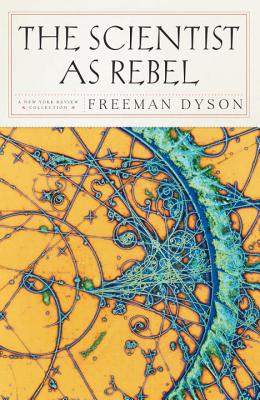 By Freeman Dyson
Prices for net books may be different than what is shown here.
Hard to Find

An illuminating collection of essays by an award-winning scientist whom the London Times calls “one of the world’s most original minds.”From Galileo to today’s amateur astronomers, scientists have been rebels, writes Freeman Dyson. Like artists and poets, they are free spirits who resist the restrictions their cultures impose on them. In their pursuit of Nature’s truths, they are guided as much by imagination as by reason, and their greatest theories have the uniqueness and beauty of great works of art.Dyson argues that the best way to understand science is by understanding those who practice it. He tells stories of scientists at work, ranging from Isaac Newton’s absorption in physics, alchemy, theology, and politics, to Ernest Rutherford’s discovery of the structure of the atom, to Albert Einstein’s stubborn hostility to the idea of black holes. His descriptions of brilliant physicists like Edward Teller and Richard Feynman are enlivened by his own reminiscences of them. He looks with a skeptical eye at fashionable scientific fads and fantasies, and speculates on the future of climate prediction, genetic engineering, the colonization of space, and the possibility that paranormal phenomena may exist yet not be scientifically verifiable.Dyson also looks beyond particular scientific questions to reflect on broader philosophical issues, such as the limits of reductionism, the morality of strategic bombing and nuclear weapons, the preservation of the environment, and the relationship between science and religion. These essays, by a distinguished physicist who is also a lovely writer, offer informed insights into the history of science and fresh perspectives on contentious current debates about science, ethics, and faith.

Freeman Dyson has spent most of his life as a professor of physics at the Institute for Advanced Study in Princeton, taking time off to advise the US government and write books for the general public. He was born in England and worked as a civilian scientist for the Royal Air Force during World War II. He came to Cornell University as a graduate student in 1947 and worked with Hans Bethe and Richard Feynman, producing a user-friendly way to calculate the behavior of atoms and radiation. He also worked on nuclear reactors, solid-state physics, ferromagnetism, astrophysics, and biology, looking for problems where elegant mathematics could be usefully applied.

Dyson’s books include Disturbing the Universe (1979), Weapons and Hope (1984), Infinite in All Directions (1988), Origins of Life (1986, second edition 1999), The Sun, the Genome and the Internet (1999), The Scientist as Rebel (2006, published by New York Review Books), and A Many-Colored Glass: Reflections on the Place of Life in the Universe (2010). New York Review Books will publish Dreams of Earth and Sky, a new collection of Dyson's essays, in April 2015. He is a fellow of the American Physical Society, a member of the National Academy of Sciences, and a fellow of the Royal Society of London. In 2000 he was awarded the Templeton Prize for Progress in Religion.

"Readers should view The Scientist as Rebel as a science project of their own. Dyson asks his audience not for agreement but only for their active engagement with his original and provocative notions. Their questions need not be his questions, and they may dispute his conclusions. But they will be stimulated, challenged, entertained and enlightened about topics as varied as science, politics and the arms race. They will discover unique perspectives on religion, global warming, and even the paranormal...readers will have no difficulty recognizing rebellion of the most valuable kind in this enlightening collection and will eagerly engage with it." --The Philadelphia Inquirer“Dyson offers a lovely collection of essays from his writing for The New York Review of Books. Part 1 and 3 focus on scientists and rebels, while parts 2 and 4 are a reminder that science could be more rebellious and radical than it is. The 29 individual chapters are organized into four categories: contemporary issues, war and peace, history of science, and personal reflections...Recommended.” –Choice "Physicist and futurist Dyson embodies the ideal of the scientist as iconoclast. In this spirited collection, he muses on the ethics of nanotech and genetic engineering, the crucial role of amateurs in science, and the richness of "nature's imagination." Provocative, touching, and always surprising." —Steve Silberman, Wired Magazine"In an eclectic but deeply satisfying collection, Dyson, a prize-winning physicist and prolific author ... expresses his precise thinking in prose of crystal clarity, and readers will be absolutely enthralled by his breadth, his almost uncanny ability to tie diverse topics together and his many provocative statements ... his writings on Einstein, Teller, Newton, Oppenheimer, Norbert Wiener and Feynman will amuse while presenting deep insights into the nature of science and humanity. Virtually every chapter deserves to be savored." —Publishers Weekly (starred review)"Dyson is a clear and compelling writer, gifts highlighted in this collection of 33 previously published, and frequently updated essays and reviews. Organized into sections on contemporary issues in science, war and peace, history of science and scientists, and personal and philosophical ruminations, these works demonstrate Dyson’s far-ranging interests and skill in writing for educated and curious generalists, qualities that ensure this volume’s wide appeal. Some readers may feel a thrill reading Dyson’s comments on military strategy; others may prefer Dyson’s thoughts on such physics-related people and issues as Isaac Newton, Edward Teller, J. Robert Oppenheimer, Richard Feynman, Norbert Wiener, and string theory. But whatever a reader’s passion, Dyson’s emphasis on rebels within science rather than upholders of the status quo makes the book especially satisfying."—Steve Weinberg, BooklistPraise for Dyson: “One of the world’s most original minds.”–London Times