The Elimination: A survivor of the Khmer Rouge confronts his past and the commandant of the killing fields (Hardcover) 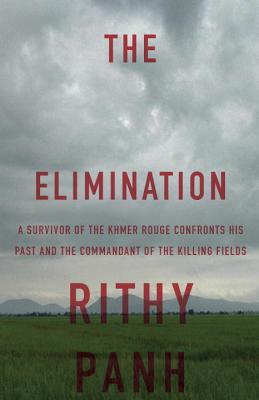 The Elimination: A survivor of the Khmer Rouge confronts his past and the commandant of the killing fields (Hardcover)


This book has been declared out of stock indefinitely, so we are unlikely to be able to get it.
From the internationally acclaimed director of S-21: The Khmer Rouge Killing Machine, a survivor’s autobiography that confronts the evils of the Khmer Rouge dictatorship.

Rithy Panh was only thirteen years old when the Khmer Rouge expelled his family from Phnom Penh in 1975. In the months and years that followed, his entire family was executed, starved, or worked to death. Thirty years later, after having become a respected filmmaker, Rithy Panh decides to question one of the men principally responsible for the genocide, Comrade Duch, who’s neither an ordinary person nor a demon—he’s an educated organizer, a slaughterer who talks, forgets, lies, explains, and works on his legacy. This confrontation unfolds into an exceptional narrative of human history and an examination of the nature of evil.

The Elimination stands among the essential works that document the immense tragedies of the twentieth century, with Primo Levi’s If This Is a Man and Elie Wiesel’s Night.

Rithy Panh is an internationally and critically acclaimed documentary film director and screenwriter. His films include S-21: The Khmer Rouge Killing Machine and Rice People, the first Cambodian film to be submitted for an Oscar, among others. His newest documentary was inspired by The Elimination.

Christophe Bataille is a French novelist. His works include the award-winning Annam, Hourmaster, and Absinthe. He has been an editor at Editions Grasset since 1997.

“The power of The Elimination lies in the telling details Mr. Panh employs to describe the madness of these years, when the Khmer Rouge worked to destroy every vestige of individuality... a searing, firsthand account of the Cambodian genocide and as such an important contribution to the history of those years. It is also an examination of the nature of evil as told from the perspectives of a victim and a perpetrator.” —Wall Street Journal

"Like no other book, The Elimination reminds us why it is crucial to study history, why education should be a nation’s highest priority, and why nothing is more important than culture and the arts. Masterfully written with the language and pacing necessary to tell such a story, The Elimination needs to be read by anyone who reads books—and more importantly, by those who don’t." —The Coffin Factory

“An exceptional document of Primo Levi’s caliber … Rithy Panh’s book, The Elimination, through its strength, the starkness of its language, and the depths of its mystery, shows its significance.” —Elle

"Harrowing personal reflections by the Cambodian French filmmaker of surviving the Khmer Rouge as a young teenager...A riveting, intimate look deep inside the machinery of the executioner." —Kirkus

“In this astounding work, Rithy Panh presents the atrocities of the Khmer Rouge regime as universal human history, intelligible to us all thanks to the extraordinary efforts of an individual.” —Timothy Snyder, bestselling author of Bloodlands

"The Elimination is a searing, firsthand account of the Cambodian genocide and as such an important contribution to the history of those years.  It is also an examination of the nature of evil as told from the perspectives of a victim and a perpetrator." —Hudson Institute

“Having survived the ‘killing fields,’ Rithy Panh now illuminates them, both through his own wrenching recollections and his extraordinary interviews with Comrade Duch, a banal mastermind behind the Cambodian genocide. That The Elimination is so elegantly understated makes it even more searing—and essential.” —David Margolick, journalist and author of Elizabeth and Hazel

“This is a great text, humble in tone and with universal import. We greet it today in the tradition of Jean Hatzfeld. For his part, Rithy Panh takes his place among those rare figures who have shared Vladimir Jankélévitch’s conviction: it’s not enough to be sublime, one must be faithful and serious.” —Le Monde

“In the tradition of a Primo Levi or a Solzhenitsyn, the Franco-Cambodian cinéaste Rithy Panh has published an exceptional testimony in which he tells of how he survived the genocide orchestrated by the Khmer Rouge between 1975 and 1979.” —Le Figaro

“With the help of Christophe Bataille, the Cambodian cinéaste Rithy Panh, having survived the Khmer Rouge massacres of the terrible years 1975–1979, gives us an incredibly powerful book. A book? More like a punch in the stomach! … It is also a book with caustic intelligence, the slow deconstruction of a mad system … this book will remain inscribed in me as major.” —La Libération

"Weaved like cross-stitches into this patchwork narrative of a life stripped bare, in which his parents, siblings and relatives wilted under increasingly extreme conditions, is a larger meditation on the forces galvanizing the destruction."—Asia Times