The Frackers: The Outrageous Inside Story of the New Billionaire Wildcatters (Paperback) 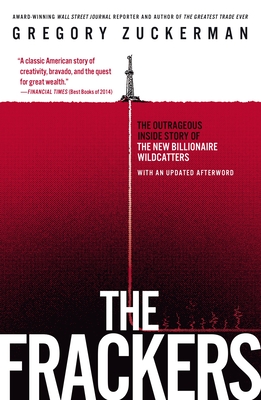 The Frackers: The Outrageous Inside Story of the New Billionaire Wildcatters (Paperback)


We can usually get this book in 3 to 7 days, except during a pandemic. We are doing our best
“A lively, exciting, and definitely thought-provoking book.” —Booklist

Things looked grim for American energy in 2006, but a handful of wildcatters were determined to tap massive deposits of oil and gas that giants like Exxon and Chevron had ignored. They risked everything on a new process called fracking. Within a few years, they solved America’s dependence on imported energy, triggered a global environmental controversy, and made and lost astonishing fortunes.

No one understands the frackers—their ambitions, personalities, and foibles—better than Wall Street Journal reporter Gregory Zuckerman. His exclusive access drives this dramatic narrative, which stretches from North Dakota to Texas to Wall Street.

Gregory Zuckerman is a special writer at The Wall Street Journal and author of the New York Times bestseller The Greatest Trade Ever. He is a two-time winner of the Gerald Loeb Award and a winner of the New York Press Club Journalism Award. He lives in New Jersey with his wife and two sons.
"Zuckerman’s fast-paced, densely interesting The Frackers is the first book to tell the stories of the obstinate, ravenous, methodical, sometimes rascally oil executives of the recent boom. By focusing on people instead of trends, it gets to the heart of why the United States is once again the largest supplier of oil and gas in the world."—The New Republic


“Told with care and precision and a deep understanding of finance and corporate politics as well as oil and geology.”— Bryan Burrough, The New York Times

“Fans of the lively, character-driven nonfiction of writers like Kurt Eichenwald and Ben Mezrich should welcome this book with open arms . . . A lively, exciting, and definitely thought-provoking book”


“A fascinating study of American entrepreneurial culture and the modern robber barons who succeeded in creating an energy revolution.”—Kirkus

“Lovers of business and capitalism will appreciate The Frackers, … Zuckerman has done valuable and timely reporting on the men and independent companies that created the shale boom.”—Associated Press