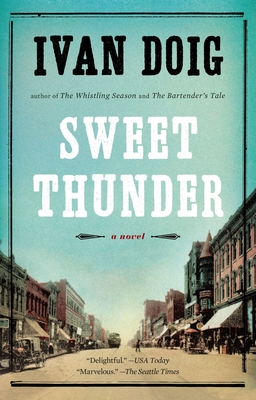 
We can usually get this book in 3 to 7 days, except during a pandemic. We are doing our best
A beloved character brings the power of the press to 1920s Butte, Montana, in this latest from the best storyteller of the West

In the winter of 1920, a quirky bequest draws Morrie Morgan back to Butte, Montana, from a year-long honeymoon with his bride, Grace. But the mansion bestowed by a former boss upon the itinerant charmer, who debuted in Doig’s bestselling The Whistling Season, promises to be less windfall than money pit. And the town itself, with its polyglot army of miners struggling to extricate themselves from the stranglehold of the ruthless Anaconda Copper Mining Company, seems—like the couple’s fast-diminishing finances—on the verge of implosion.

These twin dilemmas catapult Morrie into his new career as editorialist for the Thunder, the fledgling union newspaper that dares to play David to Anaconda’s Goliath. Amid the clatter of typewriters, the rumble of the printing presses, and a cast of unforgettable characters, Morrie puts his gift for word-slinging to work. As he pursues victory for the miners, he discovers that he is  enmeshed in a deeply personal battle as well—the struggle to win lasting love for himself.

Brilliantly capturing an America roaring into a new age, Sweet Thunder is another great tale from a classic American novelist.
Often called the dean of writers about the American West, Ivan Doig is the author of such national bestsellers as The Whistling Season and The Bartender's Tale. His work has been translated into Spanish, Japanese, German, and Finnish, and his honors include seven regional booksellers awards, the Evans Biography Prize, and the Wallace Stegner Award, among others. He lives in Seattle.

"A remarkably solid and prolific novelist in the tradition of Wallace Stegner… [Doig’s] writing and characters are delightful." –USA Today

"Doig, who holds a Ph.D. in history, is at his best in his historic novels, and he unspools this compelling tale among the clatter of typewriters and the 'sweet thunder' of printing presses… Marvelous… yet another Montana book worthy of Doig’s prodigious talents." –Seattle Times

“Doig…makes us feel a part of the very landscape and era about which he is writing while…telling a story that keeps the pages turning… Sweet Thunder stands alone beautifully…and when combined with Doig’s Whistling Season and Work Song makes a powerhouse trilogy that belongs on the bookshelf of any reader who enjoys the history of the West.” –Montana Magazine

"Ivan Doig is one of the finest novelists writing today… Doig knows how to spin a tale, and he does so here with wonderful language that flows effortlessly from his rich and diverse characters… after finishing this fine novel, one just wants more." –Portland Oregonian

"There have been many charming rogues through literary history, and Mr. Doig brings us another one: Morrie Morgan… Doig has a gift of making oddballs believable and lovable, as well as a gift for capturing place and personality in deft strokes… an entertaining story at a high intellectual level." –New York Journal of Books

"Filled with an abundance of rich characters… it is Butte itself, a tough-fisted city of plungers and promoters, bootleggers and union workers, sharpers and window men and crooked boxers, that binds the story together. Doig re-creates one of America's legendary cities and fills it with characters to match." –Denver Post

"It is always a pleasure to read Ivan Doig, who is consistently able to capture the innocence of another era. It is an innocence that, living in today’s world, seems fairy tale-like in the telling. But again, that is what Doig has done exceptionally well throughout his 12 novels, which stand more like bridges to the past than mere tales conjured from his imagination." –Fredericksburg Free Lance-Star

"Not only are Morrie and his buddies fascinating characters, but so is Butte… [Sweet Thunder] is a celebration of Doig’s love of language and poetry." –Helena Independent Record

"With a master storyteller’s instincts and a dollop of wry humor, Doig evokes a perfect landscape of the past with a cast of memorable characters. A treasure of a novel." –Library Journal (starred review)

"[A] stirring tale of greed, corruption, and the power of past sins… Doig's attention to detail, both historical and concerning characters of his own creation, is as sharp as ever. Long-time fans will recognize familiar names from previous novels and readers both seasoned and new will fall under the spell of Doig's Big Sky Country." –Publishers Weekly

"[A] marvelously atmospheric portrait of the bygone newspaper trade and an engaging cast of characters sketched with the author’s customary vigor… welcome evidence that Doig, in his 70s, is more prolific and entertaining than ever." –Kirkus

"Think Shane but with dueling journalists instead of gunfighters… A stirring tale given a melancholic edge by the fading influence of print newspapers in our very different modern world." –Booklist