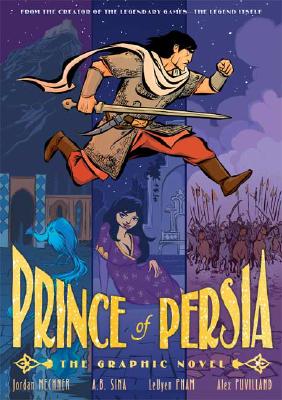 Long ago in Persia, there lived a Prince -- a man of honor, of valor, and full of strength -- a man for his people, who lived with them and took on their trials and hardships. And he was loved.

His name is no longer remembered. When people speak of him, they call him merely, 'The Prince of Persia, ' as if there have been no others, and his descendants are enjoined to live like him, to be like him, to the ends of their days.

Long ago in Persia, there were many princes, one following another, sometimes quick, sometimes slow, sometimes fat, clever, joyous, and all more or less honorable. And in some of those princes there shone the spirit of The Prince of Persia, for in Persia time spins like a wheel, and what is to come has already happened, and then happens again, year in and year out.

This is the story of two of those princes, and of the destiny that threads their lives together.

Created by Jordan Mechner, the Prince of Persia graphic novel is beautifully written by poet A.B. Sina and opulently illustrated by LeUyen Pham and Alex Puvilland.

Jordan Mechner's videogames, including Prince of Persia, Karateka, and The Last Express, have received worldwide acclaim. Over 14 million Prince of Persia games have been sold around the world. He is also the author of "Solomon's Thieves," and he wrote the script for the Disney movie adaptation of "Prince of Persia: The Sands of Time," produced by Jerry Bruckheimer and starring Jake Gyllenhaal. Mechner sold his first game, Karateka, while he was still an undergraduate at Yale, and then moved directly on to creating Prince of Persia. These were among the first games to combine arcade action with realistic animation and cinematic storytelling, and both titles became #1 bestsellers and are now considered all-time classics. In 2003, Mechner wrote and directed the documentary Chavez Ravine: A Los Angeles Story, which was shortlisted for an Academy Award. He lives in Southern California.

A.B.Sina has written for film, magazines, and journals in North America and around the world. Born in Iran, he now works between Montreal and wherever else he can manage.

LeUyen Pham and Alex Puvilland are happily married in art. LeUyen has produced several acclaimed picture books for children, including her self-authored "Big Sister, Little Sister." Alex has worked as a visual development artist for Dreamworks Feature Animation and on numerous films. They live in San Francisco with their son Leo.

After enjoying various forms as a video-game character, the eponymous prince finally leaps from the screen to the page in this magnificent and complex graphic novel.  The prince, according to each iteration of the game, which has spanned nearly two decades, has been everything from an “Aladdin-like street urchin” to a “battle-hardened fugitive.”  Here, he is manifested in two parallel stories that twine about and bleed together like twin wisps of smoke.  One takes place in the ninth-century city of Marv and features a prince of the run from his destiny as his kingdom is assailed from within.  The other takes place 400 years later, in the same city, as a princess discovers a young man in the ruins of the old palace, hiding from a doomful prophecy.  The stories can be maddeningly complex to sort through, but that really only adds to the fascination, with distinct color palettes and visual clues to help sort out matters when the chronology becomes difficult.  No mere video-game rip-off, the end result is a story defined by layers instead of linearity, with drama, adventure, and revelation all unfolding in equal measure resulting in a book that’s even better with repeat readings.  A forthcoming movie about the prince will only increase interest.  – Ian Chipman

Completing a solid evolution from video game to graphic novel, Mechner and Sina breathe life, passion and legend into the original concept. Told through intertwined narratives set four centuries apart, a prophecy serves as an anchor between the concurrent threads: “a palace must fall / and a prince must rise from the waters...” Pham and Puvilland’s vibrant, bold art creates a lush backdrop for this intense tale. Though largely based in fantasy, elemental themes—earth, fire, air and water—provide a firm sensory foundation. Readers will feel the desiccated, scorched desert earth of the peasants, cut off from water by the evil rulers; know the fiery heat of battles, rage and injustice that have spanned centuries; experience the wind beating under the wings of a philosophizing peacock; and understand the cooling relief as water protects and nourishes. This complex epic demands careful reading and a keen eye to detail. Combine these intricacies with a sprawling, visually literate landscape of love, lore and violence, and the result is a fine saga for older readers. (afterword) (Graphic fiction. YA)

The Prince of Persia is an enigma.  He’s never the same person, in the same time, living the same adventure.  This graphic novel embodies this mystery with the dual storylines of Prince Guiv in 9th-century Persia and Prince Ferdos in 13th-century Persia.  Authors Jordan Mechner and A.B. Sina took a purposeful retreat from the conventions of Western storytelling, introducing a Middle Eastern flair to an audience of loyal fans.  Guiv and Ferdos have no enemies but the passage of time, and nothing to stand in their way but their own thoughts and actions.  All other antagonists are minor annoyances as the two heroes search for enlightenment – a connection between their life and the rest of existence.

Fans hoping for the puzzle-solving action of the game will be surprised at the complex inner battles that take place in this beautifully drawn novel from illustrators LeUyen Pham and Alex Puvilland.  While an initial reading may confuse as much as dazzle, the somber adventure across centuries may be the Prince’s most epic journey yet.