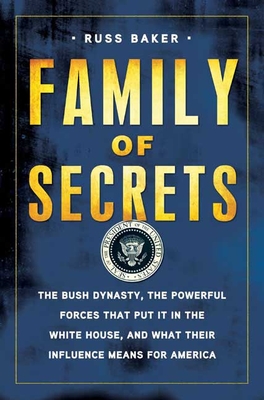 By Russ Baker
$30.00
Backordered. There will likely be a delay in getting this book

The long-hidden story of a family we thought we knew--and of a power-making apparatus that we have barely begun to comprehend.

After eight disastrous years, George W. Bush leaves office as one of the most unpopular presidents in American history. Russ Baker asks the question that lingers even as this benighted administration winds down: Who really wanted this man at the helm of the country, and why did his backers promote him despite his obvious liabilities and limitations? This book goes deep behind the scenes to deliver an arresting new look at George W. Bush, his father George H. W. Bush, their family, and the network of figures in intelligence, the military, finance, and oil who enabled the family's rise to power. Baker's exhaustive investigation reveals a remarkable clan whose hermetic secrecy and code of absolute loyalty have concealed a far-reaching role in recent history that transcends the Bush presidencies. Baker offers new insights into lingering mysteries--from the death of John F. Kennedy to Richard Nixon's downfall in Watergate. Here, too, are insider accounts of the backroom strategizing, and outright deception, that resulted in George W. Bush's electoral success. Throughout, Baker helps us understand why we have not known these things before. Family of Secrets combines compelling narrative with eye-opening revelations. It offers the untold history of the machinations that have shaped American politics over much of the last century.

Praise for Family of Secrets:

“One of the most important books of the past ten years.”—Gore Vidal

“A tour de force … Family of Secrets has made me rethink even those events I witnessed with my own eyes.”—Dan Rather

“Shocking in its disclosures, elegantly crafted, and faultlessly measured in its judgments, Family of Secrets is nothing less than a first historic portrait in full of the Bush dynasty and the era it shaped. From revelation to revelation, insight to insight—from the Kennedy assassination to Watergate to the oil and financial intrigues that lie behind today's headlines—this is a sweeping drama of money and power, unseen forces, and the emblematic triumph of a lineage that sowed national tragedy. Russ Baker’s Family of Secrets is sure to take its place as one of the most startling and influential works of American history and journalism.”—Roger Morris, former senior staff member, National Security Council, and author of Richard Milhous Nixon: The Rise of an American Politician and Partners in Power: The Clintons and Their America

“Left-wing paranoia? Baker, a solid investigative journalist, works hard to back up his claims – a reader could choke on the complex, interwoven details in Family of Secrets. He's a man on a mission, desperate to stop the “methods of stealth and manipulation that ... reflect a deeper ill: the American public's increasingly tenuous hold upon the levers of its own democracy.”—San Diego Union-Tribune

“In an era dominated by corporate journalism and an ideological right-wing media, Russ Baker’s work stands out for its fierce independence, fact-based reporting, and concern for what matters most to our democracy…A lot of us look to Russ to tell us what we didn’t know.” —Bill Moyers, author and host, Bill Moyers’ Journal (PBS)

“Russ Baker has the three most important attributes of any great investigative reporter: He is skeptical, he is fearless, and he is indefatigable. Whenever he examines anything—including the most allegedly wellcovered topics—he breaks important new ground.” —David Margolick, author and contributing editor, Vanity Fair