Can You Fear Me Now? (Paperback) 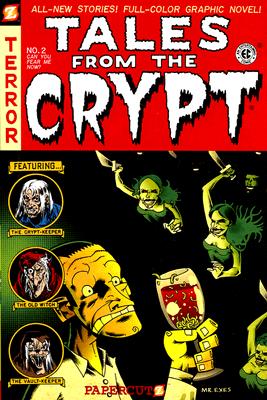 Can You Fear Me Now? (Paperback)

More scary comics stories sure to shock
The original EC comicbook series inspired a generation of young filmmakers, including Stephen Spielberg, John Carpenter, and George Lucas, as well as authors such as Stephen King and R.L. Stine. Who knows which future superstars' minds will be warped by this volume's collection of creepy comics?
"The Garden" is the shocking tale of a man named Richard, who is promised beautiful
women waiting on him hand and foot in paradise, all in exchange for completing one simple task. "Extra Life" shows Andy Dabbstein's worst nightmare come to life, when what happens to him in virtual online fantasy game, "Ogre Continent," also happens to him in reality. "Crystal Clear" offers a frightening look at what happens to a gangster, with cell phone technology imbedded in his head, when one of his victims seeks revenge.
"Slabbed" depicts the dire consequences of what can happen to you if you sell a priceless collector's comicbook to the wrong dealer. All stories introduced by The Crypt-Keeper, and his fellow GhouLunatics, The Old Witch and The Vault-Keeper, in classic pun-filled CRYPT-style.