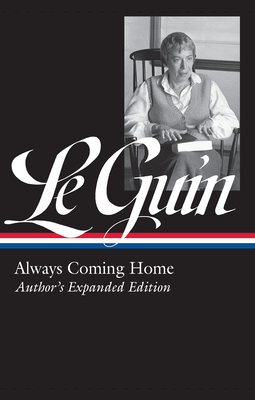 This is book number 4 in the Library of America Ursula K. Le Guin Edition series.

Ursula K. Le Guin's richly-imagined vision of a post-apocalyptic California, in a newly expanded version prepared shortly before her death


This fourth volume in the Library of America’s definitive Ursula K. Le Guin edition presents her most ambitious novel and finest achievement, a mid-career masterpiece that showcases her unique genius for world building. Framed as an anthropologist’s report on the Kesh, survivors of ecological catastrophe living in a future Napa Valley, Always Coming Home (1985) is an utterly original tapestry of history and myth, fable and poetry, story- telling and song. Prepared in close consultation with the author, this expanded edition features new material added just before her death, including for the first time two “missing” chapters of the Kesh novel Dangerous People. The volume con- cludes with a selection of Le guin’s essays about the novel’s genesis and larger aims, a note on its editorial and publication history, and an updated chronology of Le guin’s life and career.
LIBRARY OF AMERICA is an independent nonprofit cultural organization founded in 1979 to preserve our nation’s literary heritage by publishing, and keeping permanently in print, America’s best and most significant writing. The Library of America series includes more than 300 volumes to date, authoritative editions that average 1,000 pages in length, feature cloth covers, sewn bindings, and ribbon markers, and are printed on premium acid-free paper that will last for centuries.
Ursula K. Le Guin (1929-2018) was one of the most acclaimed and admired writers of her generation, the recipient of multiple Hugo, Nebula, Locus, and World Fantasy Awards. In 2014, she was awarded the National Book Foundation Medal for Distinguished Contribution to American Letters.

Brian Attebery, editor, is professor of English at Idaho State University and the editor of Journal of the Fantastic in the Arts. He edited The Norton Book of Science Fiction (1997) with Ursula K. Le Guin and Karen Joy Fowler, and is the author of Stories About Stories: Fantasy and the Remaking of Myth (2014) and Decoding Gender in Science Fiction (2002), among other books.
"It’s a remarkable book, and there’s been nothing quite like it in the last thirty-five years." —Tor.com